On a recent trip to the Tate Modern, a friend and I came across a couple of paintings by the Dutch artist, Piet Mondrian (1872-1944). Without reading the accompanying title plaque, we both recognised the artist’s distinctive use of geometric shapes and colours. We learnt that these particular paintings were titled Composition B and Composition C, to which we both responded, “Where is Composition A?” Whether or not the Tate was displaying this painting (the website suggests it was) we never found it, but it made us wonder about the significance of these compositions.

With thanks to Google, I located a photograph of Mondrian’s Composition A, which conforms with his well known style, however contains significantly more colour. 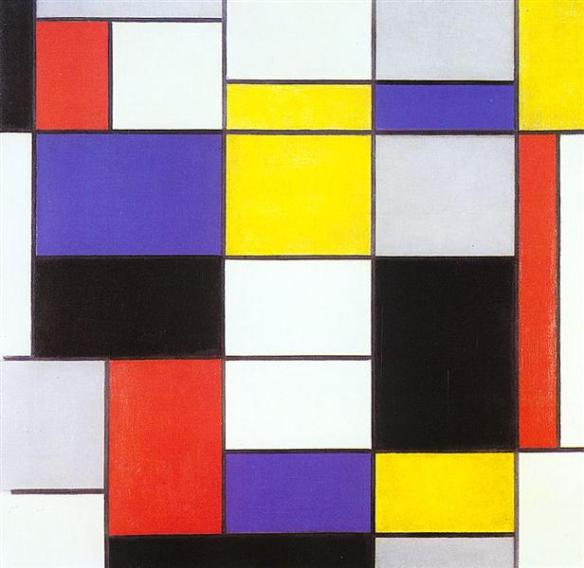 Having now seen all three of these compositions and compared them with each other, I was still none the wiser to their purpose or significance.

I wish to approach truth as closely as is possible, and therefore I abstract everything until I arrive at the fundamental quality of objects. – Mondrian

Born on 7th March 1872, Piet Mondrian, was one of the leading individuals in the establishment of abstract art. His early works were realistic representations with a delicate use of colour, however this all changed from 1907 onwards.

Mondrian was a pioneer of more than one art movement, the first significant one being Cubism. During the first world war, Mondrian was influenced by other painters of the time to stop using curved lines within his artwork. This led to the geometrical paintings Mondrian is well known for, and the development of another movement: De Stijl.

As the main face of De Stijl, Mondrian named his personal style Neo-Plasticism, a system that restricted artists to straight lines and basic colours (usually primary). During this period of time, the world was rapidly changing. The Great War provoked transformations in governments, societies, technologies and general day-to-day living. Mondrian attempted to find the undeviating reality buried beneath all the upheaval and believed that his strict, grid-like, asymmetrical paintings reflected this.

The art world may have moved on from Cubism and De Stijl, but Mondrian was a great influence on artists at the time, yet also the later industrial, decorative and advertisement art that began in the 1930s. His use of bold grids and thick black lines, encouraged designers to be more mindful of the ways artwork and typography are presented within a design. The grid structure was heavily adopted by the Swiss Typography movement, and is still used and taught today in design schools throughout the world.

Mondrian’s Compositions A, B and C, were essentially his way of coping with the destruction of the world he grew up in. By stripping back to the bare bones – black and white, primary colours – Mondrian was trying to reduce the world to its basic elements. The balance between black and white with red, blue or yellow are a representation of opposing forces that create a balance in the world, i.e. male and female, positive and negative.

Looking at the above paintings alone, you may conclude that Mondrian was an eccentric man, deliriously believing that he was accurately representing the world. However, if you study the progression from his early works to the ones he his more famous for, you will notice a gradual development of style, rather than a rapid, out-of-character change.

Whilst we will never know exactly what was going through Piet Mondrian’s head (unless we read his numerous writings), we can speculate that painting real life representations of landscapes and so forth lost the appeal after the destruction of countries as a result of war. Who would want to paint that, when instead you could focus on the true, never changing actualities at the heart of our existence?

I don’t want pictures, I want to find things out. – Mondrian