If you visit the National Gallery’s current exhibition Beyond Caravaggio, you will only get to view a handful of paintings by the powerful 17th century painter. The majority of the artworks are by other respected artists who, either through direct contact or posthumous influence, replicated Caravaggio’s original style.

Often, paintings produced during Caravaggio’s era were mistakenly accredited to him due to the similar techniques and subject matter. Caravaggio’s works are recognised by their darkness with dramatic usage of light. Some of the pieces painted by his followers do not quite replicate the ethereal beauty he achieves with his depiction of naturalistic lighting. If the scene relies on a visible light source, it is not a Caravaggio, for he never painted candles or fires.

So, the National Gallery shows us Caravaggio’s influence on other artists, but who was Michelangelo Merisi da Caravaggio? 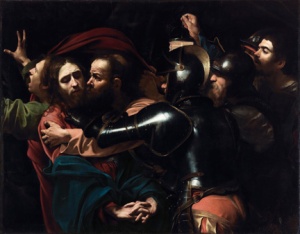 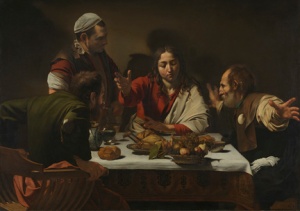 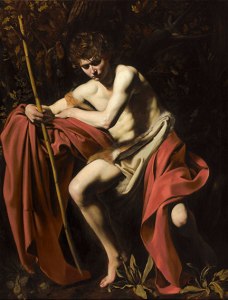 Born in Milan, 1571, Caravaggio, despite having such a great influence on his contemporaries, only had a very short career. Due to his death in 1610 aged 38, Caravaggio only has about 60 surviving pictures to his name, however his naturalistic, bold style lived on for many more years.

It is hard to imagine Caravaggio struggling as an artist, but as a young man he spent many years enduring hardship in Rome until he was finally recognised as an artist with potential by Cardinal Francesco del Monte, who subsequently became his first patron. Through del Monte, Caravaggio slowly began to get the attention he deserved, eventually receiving his first public commissions. Caravaggio’s first documented works were for the Contarelli Chapel in S. Luigi dei Francesi: Calling of St Matthew and Martyrdom of St Matthew (1599-1600).

The choice of religious scenes – familiar stories – produced with immensely dramatic lighting and shade, established Caravaggio as the most exciting artist of his time, overshadowing the previously admired artists of the day.

Caravaggio’s fame spread throughout Italy as a result of self-inflicted exile after he accidentally killed someone during a fight over a wager of a tennis match. Although constantly on the run, Caravaggio had the opportunity to work on important commissions, influencing many local artists with his poignant artwork.

Unfortunately, Caravaggio died of a fever (possibly brought about from a infected facial wound) before he got the chance to see his influence in action. His legacy lived on for the remainder of the 17th century with many artists imitating his revolutionary approach to painting.

The Caravaggisti (Caravaggio’s followers) is a term applied not only to Italians, but other European artists who flocked to Rome to witness Caravaggio’s form of Realism. Some believed his previously unseen style to be a kind of miracle, and being keen to paint as pure a picture, painstakingly copied his brushstrokes, lighting and tones. Eventually the style broadened out as each artist added their own twist – for instance including candles, fires etc – until the movement gradually faded away during the 18th century.

Other than being a drastically different approach to painting in the 17th century, what did the Italian art world find so fascinating about Caravaggio’s masterpieces? Perhaps the key thing that stood out for them was the chiaroscuro (lit. bright-dark) technique. Most artists rely on contrasting light and dark colours to make their paintings work, however the contrast between the shades in Caravaggio’s works are so strong – it is almost as though a light has physically pierced the picture. It is this aspect that is most noticeable regardless of subject matter.

When standing in front of a Caravaggio, it feels like the light source shining in the picture is situated behind you. As a result, it is almost as though you are part of the scene laid out before you. You are not just looking at a painting, you are interacting with the characters depicted.

Having been to see the Beyond Caravaggio exhibition, I have another theory as to why Caravaggio became such a celebrated painter. Firstly, I was struck by the realistic representation of material and clothing worn by the characters in the displayed scenes. It was so accurate, it could have been a photograph. Secondly, speaking of photographs, the paintwork was so smooth it was impossible to see the brushstrokes – it was so flat that, apart from the slightly flawed facial and head shapes, it could have been a photo.

I particularly like Caravaggio’s choice of colour. Of course the dramatic lighting is attractive, but I was also drawn to his use of reds – it made each painting extremely powerful and contrasted well with the dark backgrounds.  Nonetheless, I agree that it is the light – the chiaroscuro – that makes a Caravaggio a Caravaggio. My favourite painting is The Taking of Christ (pictured above) in which Caravaggio has produced a realistic shine on the Roman soldier’s armour. Absolutely phenomenal. I wish I could paint like that.

If you have time to go to London before 15th January 2017, I recommend taking a look at the National Gallery’s exhibition. Caravaggio’s paintings are impressive when looked at online, but to get a sense of awe, you need to see them first hand.

5 thoughts on “Caravaggesque: the Master and Beyond”