When I opened this blog in 2010 I had no idea I would still be using it now. It was not my choice to sign up, it was a requirement for my graphic design degree course so that tutors and examiners could check up on our Week-By-Week Planning and Personal Reflection. As the course approached the end of its final year, this blog also became a portfolio that could be used to show potential employers. However, after earning my degree I stopped using this blog and temporarily forgot about it.

A couple of years ago, I came back to my blog to upload new design work I had voluntarily done for various churches and organisations. At this time I was also attending an art group and decided I would keep a weekly blog about my progress. Soon, I discovered that I enjoyed writing and my blogs became longer and less about myself.

This year (2017) marked a big change in the purpose of my writing; I no longer post my own work, instead, I write about places in London I have been with a fantastic friend of mine. I plan to keep this up over the next year, in fact, because we have been to so many places, I already have blogs lined up until the end of February!

I find writing comes to me naturally, whereas, graphic design would often cause me a great deal of stress. Nevertheless, I have continued to draw for fun throughout the year and thought now would be a good opportunity to share some of my favourites with you. 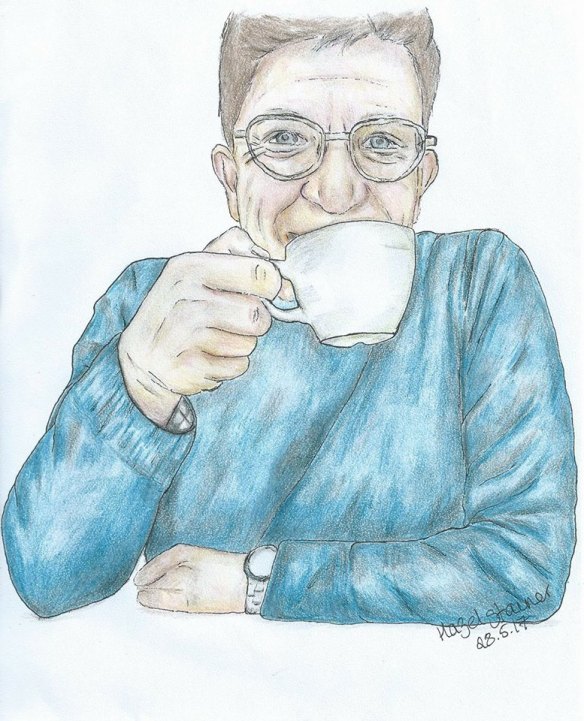 This was my first ever attempt at a coloured portrait! Those who knew me during college days will know that I only ever worked in black and white, so this was a big step for me. I was very pleased with the outcome – no, I was AMAZED at the outcome. I could not believe that I had drawn it. I was really proud of myself. Since then, I have only drawn in colour!

Within the last couple of months, I have experimented with drawing animals from photographs I have found on the internet. The first one was a dog wearing a cap seated on a chair. I could instantly imagine it as a painting and had the urge to give it a go (although I used coloured pencil).

I continue to surprise myself with the artwork I produce. I have come so far in the past seven years. In fact, anything I drew pre-2010 is absolute rubbish! I will continue to draw in 2018, and perhaps I will share more of my artwork with you.

Thank you for continuing to follow and read my blogs. Happy New Year!