Ambitious graphic designer and illustrator, Kathryn Lawes, like many young artists, dreams of having her own design company. However, it is a competitive world, and starting small is the only way to go. Having earned a degree in Graphic Design after three years of study at Portsmouth University, Kathryn has proven her desire to create by taking on the odd commission brief.

When starting up as a freelancer, it is very difficult to earn enough money to live on, therefore ex-students often end up in dead-end jobs whilst they try to get themselves known in the world of their desired profession. Kathryn, however, has been particularly lucky in landing herself a job at an architecture company, Thrive Architects. This may not involve the style of design and illustration she ultimately wants to be working on, but it provides the opportunity to develop her skills. And, at the end of the day, it is the vital experience that graphic design companies or prospective clients are on the lookout for.

uring the limited spare time available, Kathryn also takes on freelance commissions. She has worked on branding jobs, produced children’s picture books, and has also branched out into mural painting. But, the thing she enjoys most is drawing and illustration. As a child, Kathryn was asked what she wanted to be when she grew up, and she said “an illustrator”! And, now it appears her childhood ambition could actually turn into a reality.

“I love to bring a story to life,” Kathryn explains. Using mainly watercolours and pen, Kathryn’s illustrations lend themselves towards children, the soft colours and smoothness of the final outcomes being particularly attractive to young minds. With already one in print, Kathryn is currently working on a second book based on the Six Behaviour Strands used by the client, the Primary Behaviour Service (PBS). Rather than focusing on National Curriculum subjects such as Maths, English and Science, PBS concentrates on six areas: Focus, Independence, Resilience, Respect, Boundaries and Self-Regulation.

The first book in the PBS series is titled It’s Just Too Noisy, and teaches children about how to focus. Using her favoured illustration style, Kathryn introduces Barney, a rabbit who wants to relax and read his book. However, each time Barney settles down to read, he is distracted by loud noises. Unlike traditional stories, It’s Just Too Noisy invites children to engage with the story and its conclusion by deciding what Barney should do next. A choice of two actions leads to contrasting scenarios, thus educating children about the more appropriate ways of reacting in difficult situations. 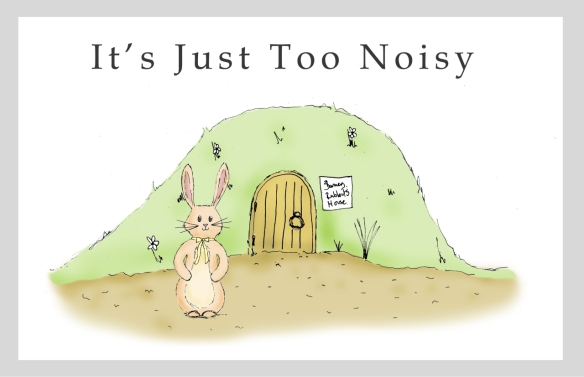 Kathryn’s love of children’s illustration stems from her own childhood.

My biggest inspirations are my Mum and Walt Disney. When I was little, my Mum would use up old tiny pots of paint by painting on my furniture various characters from Disney films. I remember having a big white toy box with some of the puppies from 101 Dalmations on, which I loved! I have always loved the Disney hand-drawn style animation illustrations, and I guess this is what fueled my desire to draw as well.

Alongside her decorated furniture, Kathryn’s strongest art-related memory is winning a design competition whilst at Primary school. The task was to create an advert and logo to promote Walk to School week, and Kathryn’s illustration of a book bag with legs landed her with first prize. Embedded in her memory is the day the Mayor of Havering personally congratulated her on her winning entry. “… a huge car with little flags at the front pulled up … a very important man got out of the car and then he came and told me how brilliant my work was! ”

As an illustrator, Kathryn does not only concentrate on child-targetted artwork. One of her favourite pieces of work to date is an illustration of a classic racing car. Inspired by the vehicles on display at Santa Pod Raceway, Kathryn has created a small series of vehicle illustrations, including a few as commissions. However, it is her first attempt at this new genre that Kathryn is most proud of.

Taking her illustration skills to new levels, Kathryn has recently added mural design to her repertoire, charging reasonable prices for beautiful wall art. Like any professional designer, Kathryn liaises with the client to make sure the outcome is exactly what they want but also employs her artistic eye to suggest the best method of achieving their wishes.

Thanks to her childhood fascination with Disney films, Kathryn is expert at replicating the original Disney characters and has often incorporated these into wall murals. Whilst cartoons are popular for children’s bedrooms, Kathryn is also skilled in typography, and faultlessly applies words or quotes to the layout. Details, including prices, can be found on Kathryn’s Creative Box website.

Kathryn’s dream is to have all six books in the PBS series published and to continue working in the graphic design field. As with all students and graduates, Kathryn has experienced ups and downs, competing against other designers as well as her own confidence. Yet, experience leads to knowledge, and Kathryn leaves us with some sound advice: “Keep Going. Honestly, the best advice is if you keep pursuing and persevering … you are much more likely to reach [your goals]. Never give up … you will never find out what potential you had.”

Kathryn’s portfolio can be found on Creative Box as well as her personal blog. She is also on Facebook and Tumblr.