Completed in 1683, Inigo Jones’ first classical building in Britain is still standing and open to the public. Originally a royal villa intended for James I’s queen, Anne of Denmark, it became the home of Charles I’s wife, Henrietta Maria on its completion. As well as being famed as a royal pleasure palace, it later became home to a naval school.

Today, the classical building is primarily used as an art gallery, containing hundreds of paintings including a few from the masters: Turner, Gainsborough and Hogarth. As part of the Royal Museums of Greenwich and only a mere 150 metres from the National Maritime Museum, it is only natural that the artworks predominately feature ships, sailors and wars, making it the most important collection of maritime art in the world. The house also displays an impressive selection of British portraiture, from kings and queens to admirals and other important names.

Inigo Jones (1573-1652) was an English architect, stage designer, draughtsman and painter, the former being his greatest asset. He is still regarded as one of the incomparable English architects to date and was responsible for introducing and influencing a classic style based upon Italian architecture. For a country that had not previously been impacted by the Renaissance movement, this was a significant development.

Sadly, very few of Jones’s building resemble their original state as a result of restoration, disintegration or extension. The two most famous and equally important are located in London. One is the Banqueting House in Whitehall, and the other is the aforementioned Queen’s House at Greenwich.

The entrance to the Queen’s House for today’s visitors is through the undercroft, which whilst may not look all that inspiring, leads to the most impressive section of the building. To access the main floors of the house, visitor’s must make their way upstairs. This can either be done by lift (the boring way) or by climbing the Tulip Stairs.

The Tulip Stairs, so named due to the flowers on the ornate bannisters, are famed for being the first ever geometric self-supporting spiral staircase in the whole of Britain. With no additional supports necessary, it is possible to look up (or down) and see all the way through to the roof by peering up the middle of the staircase [image above]. The stairs create an amazing pattern as they spiral up into the heavens – although, thankfully, you do not have to climb that high!

The Tulip Stairs lead up to both the ground and first floor, from which you can experience another extraordinary feat of architecture. The ground floor is home to the Great Hall, which although not as big as you may imagine (12m or 40ft long), is a perfect square and the key example of the influence the Renaissance ideals of mathematics and harmony had on the magnificent architect. The floor of the hall, laid in 1635, is geometrically patterned with alternating black and white shapes. As a result, the room is perfectly proportioned.

From the first floor, a balcony allows you to overlook the Great Hall, providing an aerial view of the splendid flooring. In keeping with the symmetrical design below, doors to adjoining rooms are located in the same positions – one in each corner, and another along one of the sides.

For the majority of the rest of the House, the architecture is forgotten, although it is still possible to appreciate the ceiling paintings provided by Orazio Gentileschi (1563-1639). The impressive collection of paintings is the main focus of all the other rooms in the building, beginning with an exploration of the sea through art. Most of these are from the 19th century and illustrate the changing affinities Victorian people had with the sea. Demonstrating the fisher-folk and boat builders that relied on oceans for their livelihood, there are paintings of ships, coasts and harbours showing a variety of scenes.

Some artists focus on the Thames rather than the sea – an apt setting for a Greenwich art gallery – whereas others, such as Henry Nelson O’Neil (1817-80), explored the uses of boats and ships. For example, O’Neil’s The Parting Cheer is a response to the migration of friends and families leaving in search of a better life elsewhere. On the other hand, some artists were still quite superstitious and influenced by old myths and tales of frightening creatures hiding in the depths of the murky waters. Davy Jones’s Locker by William Lionel Wyllie (1851-1931) is a great example of this.

Moving from room to room, the paintings come into the era of modern British art. The sea was still a major inspiration for many artists, particularly those from Britain on account of it being an island nation. The two world wars during the first half of the 20th century were also a significant source of direction for seascapes. Some of these may have been used for propaganda, but others were a means of encouragement for those fearing for the lives of their loved ones.

It is only natural that a gallery engrossed with nautical art and a building that once housed a naval school would also display portraits of important sailors and officers of rank. Until the First World War, portraits of men below the rank of an officer were virtually non-existent, however, in order to document the important events, it is impossible to ignore the significance of each and every participant. Alongside portraits of famous military leaders, for example, Captain Edward Jellico, are faces unknown to most. 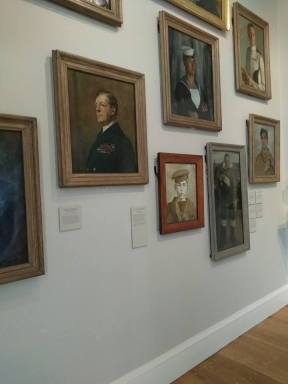 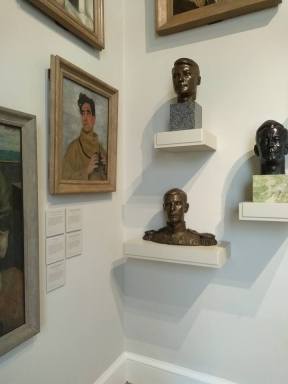 The portraits continue on the first floor, however, are of people of particular renown or rank. After the restoration of the Stuart line of the British monarchy in 1660, the royal family began to take a great interest in the navy, commissioning portraits of Admirals and spectacular flagships. These can be found in various rooms around the house.

The war against the Dutch in the mid-1600s was also a popular subject matter amongst the upper-classes, therefore a large number of paintings in the collection display scenes of sea battles. Many of these depict Dutch ships, recognised by the striped flags, struggling amongst the waves, implying they were not as strong as their English rivals. At the time, these may have been used as forms of propaganda.

The paintings around the house are all of a similar style, largely due to the time periods they were produced in. But, paint is not the only medium used and collected. As can be seen in the photographs above, the gallery contains busts of various materials. There are a number of famous names amongst these, including Charles I and the Queen’s House’s architect, Inigo Jones.

Another form of artworks on display are pen paintings (penschilderji) produced by the Dutch artist Willem van de Velde the Elder (1611-1693). As a companion of Charles II and later an inhabitant of the Queen’s House, Van de Velde produced sketches of the naval battles that he witnessed first hand. It is inspiring to see what can be captured in basic pen and ink in comparison to paintings with a full-colour palette.

The later paintings in the gallery focus on a completely different theme. The 18th century brought with it an advance in the interest of scientific discovery. It was also a time when women began to question the female role and strove to prove that they could also participate in the study of science through means of botany and astronomy. The artworks reflect these changing attitudes.

Although referred to as an art gallery, the Queen’s House is also a museum about the building’s uses and the royals who lived there. Along with the information plaques about the paintings, each room has a title and description to explain what its original purpose was.

Presumably, the Grand Hall would have been an area to entertain guests at banquets or ball dances, however, there are no references to the usage of the ground floor during its years as a royal residence. These rooms were most important during its time as a naval school. Now bedecked with paintings, visitors can walk through what was once the headmaster’s drawing room, assistant master’s dining room and so forth.

The upper floor is focused more on the original uses of the house, splitting the rooms into those intended for the King, and those used by the Queen. All the rooms are now devoted to art, from the King’s Privy Chamber to the Queen’s Closet. The nautical paintings inhabit the King’s side, presumably on account of it being a male-dominated period of history, whereas the Queen’s side focuses a lot on royalty. Here can be found portraits of the royals who spent time at the Queen’s House, including Queen Anne. Interestingly, there are also portraits of the Tudor monarchs who were long dead by the time the house was commissioned.

One thing that it is quick to notice about the collection of artwork in the Queen’s House is the lack of religious representations. This could be because the gallery is mainly focused on the maritime theme, however, it does seem odd that the past Royal family who held strong Christian beliefs would not display anything to epitomise their faith.

Despite the lack of religion, as a present for the 400th anniversary of the commissioning of the Queen’s House, Queen Elizabeth II has lent the painting Joseph and Potiphar’s Wife by Orazio Gentileschi, which is usually found in the Royal Collection at Buckingham Palace. This painting is hung back in its original location from which it has been missed for over 360 years. This was one of many paintings King Charles I and Queen Henrietta Maria commissioned during their reign. For a temporary time, free talks about the painting are available at given times of the day.

The Queen’s House also holds small exhibitions of contemporary artists and designers at the back of the building where the functions of the original rooms are no longer known. Currently, the work on display is by Marian Maguire, an artist from New Zealand known for her lithographs and etchings that combine the classical Greek style of vase painting with the history of New Zealand. On display until October 2017, Maguire’s series of lithographs titled The Odyssey of Captain Cook tell a fabricated story of the meeting of the ancient Greeks and Maori people.

Maguire combines the voyages of Captain James Cook, whose portrait resides upstairs, with her native country and the Greek myths featured in Homer’s Odyssey. Taking liberties – or artistic license – Maguire creates a new myth surrounding a myriad of characters who in reality could not possibly have met. She weaves this tale through her recognised style of lithographs, mostly in the style of ancient Greek art. However, one particular piece, A Portrait of Captain James Cook with a Classical Urn from the Collection of the Admiralty (2005), also includes a realistic portrait of the famous explorer. 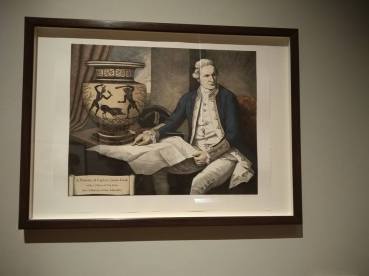 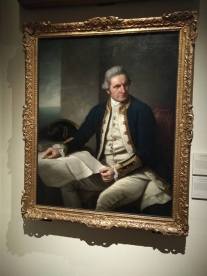 The Queen’s House Art Gallery is a beautiful building to visit containing some amazing works of art. The quiet atmosphere provides the perfect setting for art lovers to study paintings by artists of up to 400 years ago. Alongside this is the opportunity to learn more about the advances in art, science and the Navy, as well as discovering new details about the past British monarchs. With free entry and staff on hand to supply additional information, it is an opportunity that should not be passed up. The National Maritime Museum may be the most famous of the Royal Museums, but the Queen’s House is by far the more impressive. Enjoy your visit.