The ‘supreme example of the house-museum in the world’

Born in Berkshire, 1753, (Sir) John Soane, following in the footsteps of his bricklayer father, took his passion for buildings to the next level when he became a pupil of the architect George Dance at the mere age of fifteen. After studying the subject at the Royal Academy in London, Soane spent some time in Italy before returning to England where he later secured the position of Architect and Surveyor to the bank of England in 1788. Eventually he became a Professor of Architecture at the same academy he attended as a student.

Soane’s passion was not only significant for his career, but influenced and shaped his entire life. His marriage to Eliza Smith prompted him to purchase and remodel No. 12 Lincoln’s Inn Fields – supposably taking advantage of his wife being a heiress – as a home for his family of two sons. This was in 1792, however sixteen years later he began rebuilding the house next-door – No. 13 – as an extension to his original home. Eventually, No. 14 was added to his personalised home meaning that he was able to rent out parts as a way of earning extra income, as well as opening a museum and creating a particularly inventive picture gallery.

By the time Soane had finished renovating No. 12, 13 and 14, the structure resembled a maze more than a house. From the outside, the buildings innocently stand there refusing to provide the merest suggestion of the labyrinth found inside, however stepping through the front door takes you to a new dimension. With unexpected doors, corridors and mysterious rooms, it is easy to get yourself lost and turned around several times throughout your visit. If you were to release a cat into the building (don’t do it), there is a high chance you will never see it again!

Although Soane’s architecture is an impressive feat, it is not the main attraction. On his death in 1837, Soane’s house was left to the nation, which he had bequeathed as a museum for the public on the condition that it remain “as nearly as possible in the state in which he would leave it.” So, what is it about the house that makes it museum-worthy? The contents, of course.

Sir John Soane may have been one of England’s greatest architects, however was also a great collector of art, sculpture and painting. He used his home primarily as a laboratory for his architectural ideas, but also used his intriguing collections for teaching purposes. Students were left to wander through rooms to study and draw the accumulation of objects on shelves, walls, floors, and wherever else he managed to squeeze something in.

Some of the rooms were obviously decorated with the intention of being lived in, for instance the dining room, drawing room, study and dressing room. Despite this, their contents are still noteworthy objects. The furniture Soane purchased were not simple, function-based items, but expensive, meaningful amenities. Many were made specially for Soane, however there are chairs imported from China amongst the Classical vases, astronomical clock, oil lamps and frescos.

Those items, however, are a few of the more “normal” pieces in Soane’s collection. Head downstairs to the former wine cellars and you find yourself transported to ancient Rome in a basement titled the Crypt, reminiscent of the burial tombs or catacombs of bygone eras. The rather eerie, morbid atmosphere is summoned up by the cinerary urns, replicas of classical statues, gothic ornaments, plaster casts of grotesque heads, and, most importantly, the sarcophagus of an Egyptian king.

King Seti (1303-1290 BC) was interred in a sarcophagus carved from a single piece of calcite limestone and scored with hieroglyphics, telling the Egyptian story of the soul’s journey to the afterlife. What possessed Soane to make such a purchase is unknown, but in 1824 it was placed in his Sepulchral Chamber and has remained there ever since.

The basements, whilst containing the most fascinating items, is not necessarily the best room of the house. Some visitors may prefer the staircase and recess dedicated to William Shakespeare, complete with stain glass windows and paintings based on his plays, as well as a shrine featuring a cast of the original bust from the parish church of Stratford-Upon-Avon. Yet, without a doubt, the most impressive room is The Picture Room located upstairs.

Despite being a relatively small area, in comparison to most galleries, Soane managed to fit 118 paintings into his Picture Room. How? At a glance, it looks like an ordinary room (that happens to have a few famous paintings in it), however on closer inspection it is revealed that the walls are, in fact, hinged screens, that when opened, reveal even more artworks. The paintings cover the walls – real and fake – from floor to ceiling, using all space available. And, these works are as grand as the room itself.

Amongst Soane’s collection of paintings are a number of notable names: Canaletto, Turner, Fuseli; as well as architectural drawings designed by Soane himself. But, the most important pictures – the reason some people may visit the museum – are the eight paintings by William Hogarth that make up The Rake’s Progress. These are the originals, painted during the 1700s, and kept protected behind one of the wall screens.

Due to Soane’s instructions, the house has remained as close to the way it was left at the time of his death. Apart from restoration works to make the environment more suitable for visitors, the general contents of the building has been carefully preserved. Unfortunately, this means that the Museum’s owners have been unable to attach labels or information panels, as this would disturb the atmosphere and charm that Soane intended the public to experience. A short guide book is available for purchase at the entrance to help you find your way around the labyrinth of rooms, and provide a few paragraphs about the main attractions.

It is a shame that the museum only reveals a limited amount of information about Sir John Soane, his architecture and bizarre collection of oddities. One can assume that he was a rather unconventional man prone to whimsical ventures, yet why he chose to collect and display such items is anyone’s guess. But, we do not need to know the man to enjoy a tour around the surreal establishment. You will never see another house like it! 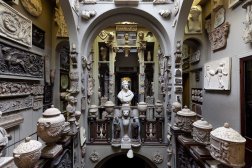 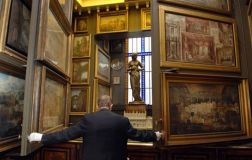 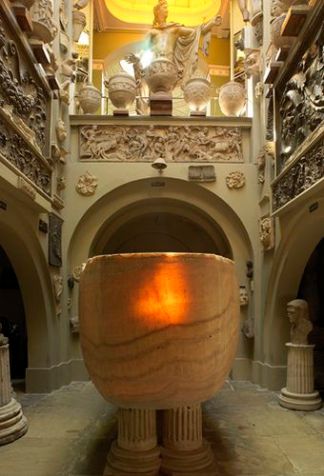