The past 60 years have seen significant changes in the United States of America. As the country became more industrialised, upsetting many workers and families, people began to reject the past government methods and ideals, in response to the changing times. Although sometimes resulting in adverse outcomes, for example, assassinations, citizens passionately expressed their views on the changing times, highlighting racism, homophobia, AIDS and other crises.

Although often open to interpretation, artwork can provide a more accurate representation of past events than written accounts, which may omit truths and lack evidence. The Great Depression of the 1930s prompted the beginning of a new wave of art, now known as Abstract Expressionism, which expressed the artists’ opinions far more greatly than landscapes and portraits that only depicted what the eye could see.

The development of technology meant that the tools available to artists increased, thus a new art movement exploded onto the scene. Pop Art is a term that encompasses works of many famous American artists, such as Andy Warhol, Jasper Johns and Robert Rauschenberg, who, with the help of technological advancement, experimented with printmaking and bold, vibrant colours.

The British Museum in London is currently displaying examples of Pop Art in their exhibition The American Dream: pop to the present (until 18th June 2017). Amongst the assorted works is the notable Marilyn Diptych by the aforementioned Warhol, which despite being recognised by the majority, is not usually easy to view in person.

Coined in the late 1950s by art critic Lawrence Alloway, Pop Art is the term used to describe the artwork and imagery based on consumerism and popular culture. Artists appropriated iconography from comic books, advertisements, television and film in their artworks and designs, thus appealing to the common people rather than the highbrow interests of the upper classes.

As an expansion of Abstract Expressionism, this latest movement rejected the theories and seriousness of art and welcomed the new methods and machines that allowed artists to reproduce imagery of everyday items. Examples of this new way of production can be seen in Jasper Johns paintings of flags, numbers and beer cans. Robert Rauschenberg took this one step further, employing collage to demonstrate a range of subject matter.

Eventually, even the use of painting was rejected in preference of commercial techniques, for example, screen-printing, which Warhol is famous for utilising. Video demonstrations can be viewed at the British Museum of the screen-printing process. In fact, it shows Warhol producing one of his numerous works, applying stencils and paint to produce the shapes and imagery he intended.

By using commercial techniques, Pop Art, unlike previous art movements, was quick and easy to produce, making it a suitable method of expressing the views and wants of the people of America. As food, motor vehicles and sex became commodities in the eye of the public, artists were swift to encompass these themes in their work. As a result, these contemporary methods and styles were the go to media to produce banners, posters and such forth to demonstrate views on black civil rights, homosexuality, the AIDs crisis, war in Vietnam and so forth.

Britain was also influenced by the growing popularity of Pop Art, particularly inspiring artists such as David Hockney and Richard Hamilton. Hamilton expressed the style as “popular, transient, expendable, low-cost, mass-produced, young, witty, sexy, gimmicky, glamorous and Big Business.” Despite his overindulgence of adjectives, Hamilton is certainly correct about its popularity, no doubt enhanced by the easy and lack of cost to mass-produce the artwork. Unlike other art movements, which start off small before eventually being recognised, Pop Art was a success on a material level, appealing to both the public and collectors.

Naturally, there were critics who retained an unfavourable opinion of the flamboyant movement. Harold Rosenberg, an American writer, deemed Pop Art “a joke without humour, told over and over again until it begins to sound like a threat.” Noting the use of commercial technology, Rosenberg expanded his opinion, stating that it was like “Advertising art which advertises itself as art that hates advertising.”

Despite the contrasting opinions, Pop Art certainly had its uses, as demonstrated in the British Museum’s exhibition. Examples of posters and artwork featuring the typical style are shown alongside videos and explanations of the growing unrest, boycotts and protests occurring throughout the 60s and 70s in America. However, the original intention of Pop Art remains ambiguous. Certainly, it benefitted the expression of political discord, but was the movement created with that in mind?

The initial rooms within the exhibition The American Dream appear to be more experimental than purposeful. With technological developments happening around them, artists appeared to be thinking “what happens if I do this?” rather than “I am doing this because …” Experimentation with various methods of printmaking provided artists with the opportunity to learn and discover new techniques and apply. Take, for example, Jim Dirie’s paintbrush etchings (c1970s), of which he did several. There is no message, such as with the majority of Pop Art, yet he has used one of the developing methods of the time. The fact that Dirie produced so many of the same object, implies he was searching for a style and effect he was happy with aesthetically, rather than attempting to communicate anything to the audience. 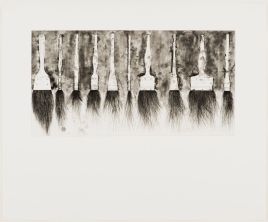 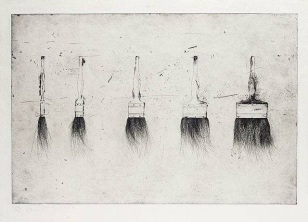 Robert Longo is another artist featured in the exhibition who appears to have used typical Pop Art techniques as a method of producing art, rather than conforming to the commercial and demonstrative scene. Famed for his hyper-realistic charcoal drawings, Longo has produced numerous illustrations of the same figures (Eric and Cindy) in various expressive dance poses. Firstly by staging photo shoots, Longo copies the figures onto paper to produce life-size representations. Although charcoal is his primary medium, the version of Eric and Cindy presented in the exhibition is created using lithography, a technique often applied in the commercial printing industry (pre the computer-age).

Lithography involves drawing (usually in wax) onto a stone slab or other suitable material. With the application of chemicals and ink, a print of the drawing can then be transferred to paper. This method provides the opportunity to create several copies of the artwork, rather than painstakingly sketching each one from scratch. Longo, an exhibiting visual artist, most likely employed this technique in order to benefit himself, rather than as a contribution to the movement. 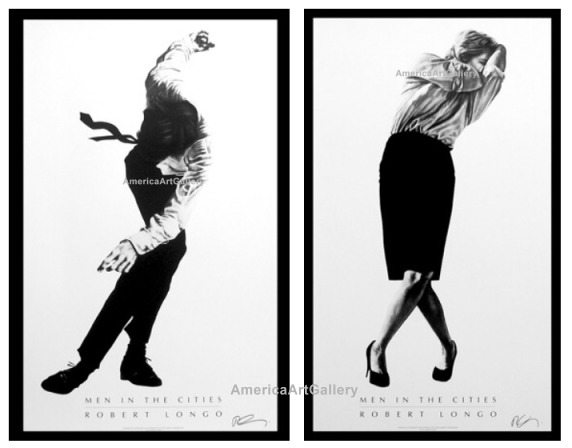 As the exhibition progresses, the artwork becomes more functional, particular in terms of politics. Pop Art was an expressive means of getting opinions across to a wide audience, in particular, members of the general public who may be interested in the pop culture references. Displayed in chronological order, enabling viewers to witness the progression of the movement, the artwork covers all the major events that occurred in America from the 1960s onwards.

Although visual methods of propaganda had already been used before, Pop Art was probably the first opportunity the general populace had to communicate their beliefs and attitudes. This is something that is still employed today, for example during public marches and demonstrations, or in the form of guerrilla advertising.

The Pop Art aesthetic may not appeal to all, but it reveals so much more than an artist’s skill. The movement has altered the way society can involve itself in matters where they have previously been forced into silence. It is not merely an art movement, it is a form of widespread expression. Without it, many people may not have the rights they take for granted today.

Only a month remains of the exhibition, so if you wish to view the collection of American Pop Art, you need to get yourself to the British Museum as soon as possible. As a bonus, under 16s can get in for free!