I deliberately set out to prove I could do four entirely different sorts of picture like Picasso.

Until 29th May 2017, Tate Britain are exhibiting the life works of David Hockney (b1937), one of the most widely acknowledged artists of the present day. Displaying work from his early days as a student at the Royal College of Art right up until his newest works, the exhibition showcases the different styles and techniques Hockney experimented with during different periods of his life. Arranged in chronological order, the artwork tells the story of its creator as well as delving into the mind of a true artist.

Whilst studying in the 1960s, Hockney was subjected to the influences of a whole range of styles and artists. Although it is usually easy to identify a Hockney painting, his work as a student was vastly different. Inspired by abstraction, Hockney produced child-like canvases filled with splashes of paint, graffiti styled letters and numbers, phallic shapes and freehand drawings. Most of these artworks were related to themes of sex, love and homosexuality, which is suggestive of issues he may have been facing at this time.

Shortly after finishing college, Hockney moved on to new topics and new styles. Although his subject matter remained broad, he began focusing on more domesticated scenes. These, naturally, contained people, and are probably some of his more famous work. Later he got people to sit for him, however at the end of the 60s, Hockney was more focused on the people he observed around him. Often featured were naked figures, continuing his theme of sex and love.

For a large part of his life, Hockney has lived in the United States, relocating to Los Angeles as his career began to take off. Exposed to new scenery, climate and architecture, he began to use these as the focus points of his paintings. California is a state with one of the warmer climates, therefore items such as lawn sprinklers and swimming pools were fairly common. Whilst Hockney was beginning to take a naturalistic approach to art, he implemented a simple form of abstract style to capture the sense of water in motion. Therefore, his artworks were unique, not conforming to any particular movement. 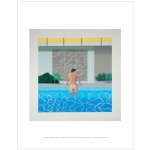 Hockney soon moved on to portraits, although not commercially. Only painting people he was already acquainted with, Hockney carefully staged the compositions, combining informal poses and comfortable settings with the traditional portrait style. Hockney has become well-known for his portrait style – in fact, the Royal Academy exhibited a series of these in 2016. What makes these paintings most impressive is the choice of media and his resolution to paint everything from life. Choosing acrylic paint was a bold move; as artists will know, this paint drys quickly and cannot be removed from the canvas, therefore mistakes could not easily be rectified.

The 20th century saw the biggest changes in technology and, unlike artists from bygone eras, Hockney was able to attempt new ways of making art as each advancement appeared. In the 1980s, for instance, Hockney utilised the growing interest in photography, particularly in the form of the Polaroid camera, to create abstract works of art. Instead of photographing a scene in the traditional way, Hockney photographed each section individually, using the carefully positioned print outs to reveal the whole image – sort of like a jigsaw. This meant that the final outcome often had a double-vision effect as a result of overlapping sections where the model or scenery may have shifted, or the imprecise placement of the camera.

As the world entered the 21st century, even more options were presented to Hockney to manipulate into works of art. His most recent works have fully encompassed digital inventions, making him one of the most versatile artists of the time. Firstly, he embraced the world of film, using multiple cameras to create a cubist-like sequence showing the changing seasons of a particular scene in Yorkshire. The Four Seasons is on display toward the end of the exhibition, although examples can be found online.

Hockney has not left his drawing and painting behind however, but with the discovery of the iPhone and iPad, he has almost dismissed conventional sketchbooks, preferring to use digital apps to draw using his thumb or a stylus. Again, a few examples of these can be seen in the final room of the Tate’s exhibition.

To this very day, David Hockney continues to engage with his accustomed range of subjects, including portraits and still life. They may have taken on a more digital nature, however that does not stop them from being works of art. Despite his increasing age, it looks like the world can expect more Hockney masterpieces in the near future. 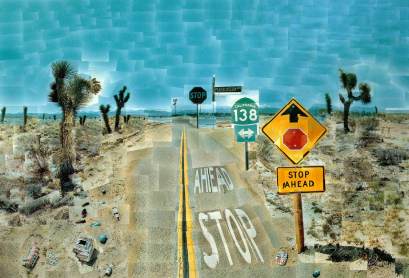 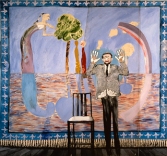 This year David Hockney returned to the Royal Academy of Arts with a selection of his latest works, 82 Portraits and 1 Still-Life (July-October 2016). Throughout his life Hockney has painted a variety of subject matter, however the almost octogenarian is continuously lured back to the genre that has played a major role in his lengthy career: portraiture.

Although born in West Yorkshire, Hockney has spent a vast amount of time in Los Angeles from where he accumulated numerous friends and acquaintances. Critics on viewing the recent exhibition will have noticed that the sitters Hockney has painted, although named, are unknown to the general public. Hockney has painted the many friends of Los Angeles, their friends and their families, thus giving an insight into the types of people Hockney chooses to be associated with. As Hockney does not take commissions, instead inviting individuals to sit for him, he has not painted any celebrities.

Some may feel disappointed at not being able to recognise any of people in the portraits hanging in the gallery, however this gives everyone the opportunity to admire the artwork and painting technique without being distracted by who is being depicted. Whilst Hockney’s portraits are realistic they do not resemble photographs, thus highlighting different personalities, emotions and attitudes surrounding each individual. There is a uniformity in colour (vibrant blue and green acrylic backgrounds) and use of brushstrokes that makes it obvious that each portrait belongs to one body of work.

Studying the paintings closely the brushstrokes may look rushed or imprecise, however Hockney spent two to three days working on each individual canvas. His is a style that is impossible to replicate by anyone else, as only he can create such an immersive effect. Hockney’s work is not merely a painting of the subject in front of him, it is an intense psychological study of both the model and the artist.

Those already familiar with David Hockney will instantly recognise the style of painting – mostly due to the garish colours – and for those who don’t, these 82 portraits (and one still-life) are a great introduction to the renowned artist.

– If you are wondering about the “1 Still-Life” aspect of the exhibition, here is the story behind it: “The still-life was painted when one sitter was unable to keep the appointment; primed to paint, Hockney turned to what was available in the studio – a selection of fruit and vegetables.” 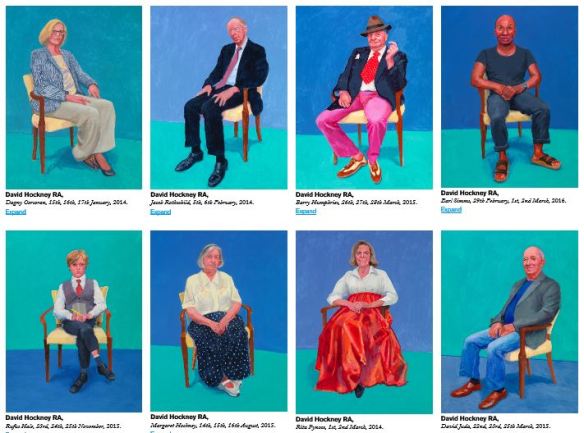