Not long ago, I visited the Museum of London with a friend because … why not? Whilst we were discovering the history of London (from prehistoric eras to the present day), we were both drawn to a particular painting hanging on the wall in the Expanding Cities – 1670s-1850s gallery. Neither of us were familiar with the artwork, nor the artist, but the bright colours were powerful and enticed me to have a closer look. 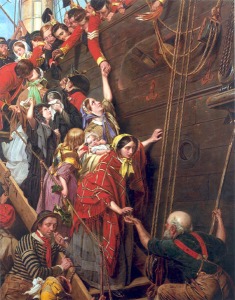 The painting, I learnt, was called Eastward Ho! by a man named Henry Nelson O’Neil, and was completed in c.1857/8. A minuscule notecard was situated to the left of the frame, providing an inadequate explanation and description of the artwork:

Soldiers are shown boarding a ship at Gravesend, leaving to fight in the ‘Indian Mutiny’ – the first Indian war of Independence. They are saying their final farewells to their loved ones. This immensely colourful and vibrant painting was Henry Nelson O’Neil’s most popular work.

The basic scenario has been explained, but who was Henry Nelson O’Neil? Why did he choose to paint this particular situation? How comes, if this work was so popular, I have never heard of it, nor him?  Let’s find out. Henry Nelson O’Neil, who are you?

Henry Nelson O’Neil was born in Russia on 7th January 1817, however he spent the majority of his life in England, where he moved with his parents in 1823. Despite his origin of birth, his parents were British nationals, therefore his brief Russian beginnings had very little impact upon his future. Nothing is known about the O’Neil family, nor his childhood, until he entered the art scene in 1836 after enrolling at the Royal Academy.

The year 1838 saw O’Neil’s first exhibited artwork on display at the academy. Simply titled The Student, this picture – sadly unknown today – sparked off his career, resulting in almost 100 of his paintings adorning the academy’s walls during his life time. O’Neil produced a new painting almost yearly, experimenting with a range of subject matter. Art historians can assume the artist was an educated and cultured individual on account of his interest in painting scenes from literature and the Bible, as well as historical incidents.

O’Neil opted for striking colours, however his compositions were often criticised as faulty. It appeared that O’Neil was averse to demonstrating negative emotion in his artwork, resulting in unrealistic contexts. A particular example is titled The Parting Cheer (1861) which showed the emigration of British and European families at a time when this would have caused heartbreak, worry and despair. However, as the title suggests, O’Neil painted a cheerful atmosphere, implying that emigration was a cause for celebration rather than a time of uncertainty.

The Last Moments of Mozart

More popular were O’Neil’s romantic scenes, particularly ones portraying the deaths of Mozart and Raphael. The Last Moments of Mozart (1849) shows the composer, moments from death, listening to a performance of his Requiem.

O’Neil also had a go at writing, publishing Lectures on Painting delivered at the Royal Academy containing a selection of talks he gave to students at the academy. Moving away from art, O’Neil also attempted a few pieces of literature, however he supposably was not all that successful in this venture. He also had a passion for music and enjoyed playing the violin. It may be assumed that O’Neil continued working until his death on 13th March 1880. His body is interred in Kensal Green Cemetery.

Compared with other artists of the era, O’Neil does not stand out amongst the greats, and today remains virtually unknown. The most significant endeavour during his lifetime is arguably his connection to the group of artists known as The Clique.

Formed by Richard Dadd in the late 1830s, The Clique was a group made up of an assemblage of British artists, Henry Nelson O’Neil being amongst them. Not much evidence remains of The Clique‘s existence, however it is supposed that the group met up to sketch and receive opinions on their artwork.

The Clique apparently rejected academic high art in favour of genre painting – a term associated with the celebrated William Hogarth, who was probably a great influence to the group. They believed, like Hogarth, that art should be judged by the public, not by preexisting academic ideals.

Hopefully the Museum of London will continue to display Eastward Ho! as part of the exhibition, not only because it represents a particular event in London, but because it is one of the only remaining evidences of O’Neil’s existence. Although he may not have made himself known to the world, it would be a great shame to lose all recognition in the future.