Where artists and children have inspired each other since 1740

Charities play a vital role in societies throughout the world. Thanks to volunteers and funding, many lives have been changed for the better. From international organisations to independent health-focused charities, so much is being done in an attempt to improve the conditions of those less fortunate. Coram is the UKs leading charity in the field of adoption services and dates back to the 1700s when it was first established as The Foundling Hospital by a man named Thomas Coram.

Thomas Coram was concerned about the desperate poverty on the streets of London, particularly in the case of children. At the beginning of the 18th century, 75% of children under five died as a result of neglect or disease due to the increasing destitute state of Londoners.

Although the idea of charity organisations existed across the continent, Britain had yet to jump on the bandwagon. Therefore, thanks to Coram’s determination, the first charity was born. By taking in babies from mothers without the means to look after them, The Foundling Hospital greatly improved and saved the lives of thousands of children.

The hospital continued to protect children from the disease-ridden streets until the 1900s when attitudes towards children’s emotional needs changed. In 1953, the hospital ceased to take in children, instead,  renaming themselves the Thomas Coram Foundation for Children, focused on nursery, welfare and foster services. Now shortened to Coram, the charity is registered as an adoption agency and continues to give the best possible start in life for as many children as possible.

The original buildings of The Foundling Hospital no longer exist, however, the headquarters in Brunswick Square, which opened in 1939, does. As of June 2004, this building has been open to the public and renamed The Foundling Museum.

The Foundling Museum contains a wealth of knowledge about the original hospital, its patrons and its former pupils. In order to fund the charity, artists donated works to be exhibited to members of the public, thus creating London’s first art gallery. The most important supporter from the initial conception was painter and engraver William Hogarth (1697-1764). Having had a precarious childhood himself, Hogarth was eager to become part of a charity for children of the poor. He donated several artworks, including the hospital’s first piece, a portrait of Thomas Coram. Another of Hogarth’s paintings The March of the Guards to Finchley (1750) was also donated. Both are on display in the museum. 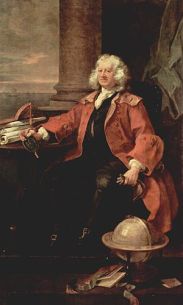 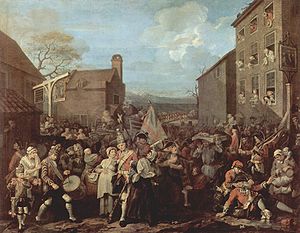 The March of the Guards to Finchley, William Hogarth, 1750

William Hogarth was also involved with the design of some sections of the original hospital – a few of which have been preserved and re-erected in the museum’s building. He also designed the Foundling Hospital Coat of Arms (1747), which was proudly displayed above the entrance to the residence.

It was not only painters who contributed towards The Foundling Hospital, musicians and composers were also eager to play a part. Alongside Hogarth, George Frideric Handel (1685-1759) was significantly valuable to the hospital. Handel’s support began in 1749 when he offered to conduct a benefit concert. The audience included a great number of distinctive people including the Prince and Princess of Wales. Over 1000 people attended and, amongst some of Handel’s known works, the Foundling Hospital Anthem, written by the composer himself, was performed for the first time. A year later, Handel conducted another benefit concert, this time performing his famous Messiah.

Handel’s Messiah became a significant musical work for The Foundling Hospital, being performed on an annual basis. Collectively, these concerts raised £7000, which today would be worth well over a million. On Handel’s death in 1759, a copy of the score was left to the hospital in his will, so that the charity could continue benefitting from the concerts for years to come.

The Museum celebrates Handel’s life and his contribution to the charity with his very own gallery located on the top floor of the building. As well as a portrait and plaster bust, the room displays items relating to the conductor and his Messiah. Most importantly, protected behind a screen, are the original will and codicils signed by Handel, stating his bequest to The Foundling Hospital.

The donated artwork takes up most of the space in the museum, lining the walls of rooms and staircases. Nevertheless, part of the ground floor has been devoted to the history of the hospital. In glass cases, are clothing, bedding, crockery, receipts, registers and so forth belonging to the original inhabitants of The Foundling Hospital. Most noteworthy are the cabinets containing tokens that mothers left with their babies.

From the moment the hospital doors were open, the greatest care was taken in noting all the items that arrived with each child, a physical description and any significant marks to distinguish which child belonged to which mother in the event of a reunion in the future.  However, as children grew, their features would alter, making it more difficult to prove identity. Since names were changed in order to respect the mother’s anonymity, the hospital encouraged the parents to leave a token of some sort for the child to keep, from which any future claims could be accurately affirmed.

The tokens on display show an example of the range of items used to identify children. Each is unique in some way, be it a piece of embroidery, an item of jewellery or a disfigured or personalised coin with a name or number etched into it. It is amazing that these did not go astray during the children’s lives at the hospital, and that so many still remain intact today.

Although photographs exist of the hospital’s later years, paintings are relied on to understand the situation during the 18th century. The majority of the paintings, particularly those along the staircase, are portraits of governors and other notable names associated with The Foundling Hospital. Yet, hidden in certain rooms, are remarkable scenes depicting life in and around the hospital. A particular series of note can be found in the Committee Room alongside Hogarth’s The March of the Guards to Finchley.

Emma Brownlow (1832-1905) produced a series of four paintings that reveal the life at The Foundling Hospital. Initially, it may come as a surprise that a woman of that era had the opportunity to study and paint in oils, however, on learning her father was John Brownlow, one of the hospital’s secretaries and ex-foundling, it becomes clear why Emma was such a reliable source of accurate representation. Growing up around the foundlings, Emma was able to illustrate the uniforms, the admission system, the infirmary, and the emotions and behaviour of the children. More of Emma Brownlow’s paintings can be found elsewhere in the museum.

The Foundling Restored to its Mother, Emma Brownlow, 1858

Emma’s father, the aforementioned John Brownlow, had some correspondence with the author, Charles Dickens, who, like him, had a difficult childhood and was ashamed of his upbringing. It is thought that Dickens used both his own experiences and his observances at The Foundling Hospital to accurately portray his celebrated characters.

The paintings of The Foundling Hospital and its patrons add to the historical knowledge imparted by the museum. The Court Room, however, contains four large artworks that are metaphorical rather than representational. These illustrate stories of the benevolence and deliverance of children in either religion, mythology or history. The artists liken the foundling children to biblical characters such as Moses and Ishmael, and one chose to paint Little Children Brought to Christ (James Wills, 1746) to emphasise the importance of all children.

The most famous artist displayed in the Court Room is, of course, William Hogarth with his Moses Brought Before Pharaoh’s Daughter (1746). Assuming most people know the famous Bible story, the significance of this scene is the similarity of the return of Moses to his adopted mother from his wet nurse (his real mother), with the way in which the foundlings lived the first five years of their lives. After passing medical tests, babies were sent to responsible wet nurses in the country to be fed and looked after, until, at the age of five, they returned to the hospital to live and attend school.

The Finding of the Infant Moses in the Bullrushes, Francis Hayman, 1746

Just like for visitors during the 1760s, famous artworks are on show for everyone to see. Despite The Foundling Hospital’s closure, the charity (Coram) is still running, therefore artists are continuing to donate artwork to be included in what is now the museum. The basement of the building contains the perfect space for temporary exhibitions for 21st-century artists to showcase work influenced by stories and history of the foundlings.

Well-known names such as Tracey Emin, Quentin Blake and David Shrigley have all appeared in exhibitions during the past ten years. Incidentally, the most famous and popular of all the displays is the current presentation of Jacqueline Wilson’s Hetty Feather. Written during 2008 and recently adapted for television, Hetty Feather tells the story of a courageous 19th-century foundling, bringing the past alive for 21st-century children.

Picturing Hetty Feather is running until 3rd September 2017, converging with the school summer holidays so that all Jacqueline Wilson fans around London can attend. Props and costumes from the CBBC production are on display with the opportunity for children to dress up as a foundling and sit in a typical 19th-century classroom. The opportunity to view an interview with the famous author is available, and it is impossible to miss the illustrations by the respected Nick Sharratt.

There is something for everyone at The Foundling Museum to appease children, historians and art aficionados alike. Immersed in history, the museum tells a positive story of a cause that has developed and shaped the way children in care are treated today. Oftentimes, comments are made about the lack of modern techniques that could have prevented disasters of the past, but in spite of the absence of digital technology, the founders and governors, particularly Coram, Hogarth and Handel, were dedicated enough to create a highly successful charity.

The Foundling Museum is open every day except Mondays, charging £8.25 (£5.50 concessions), with an added £3 for the temporary exhibition. Children and National Trust members are welcome free of charge.