It has already been five years since London held the 2012 Olympic and Paralympic games. Years of preparation took place beforehand, building new venues and creating a sporting complex for an event that would only last a few weeks. However, unlike the situation in Rio after the last Olympic games, London has not abandoned this expensive project and is continuing to use and develop the Olympic Park today.  Christened the Queen Elizabeth Olympic Park in commemoration of the Queen’s diamond jubilee in 2012, the area was developed into the largest urban park in Western Europe by restoring wetland habitats and cultivating native plants. 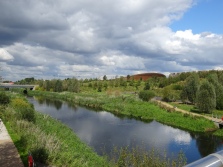 Of course, the original Olympic arenas are still in use and sit within the park in all their quirky architectural glory. The London Aquatics Centre has been open to the public since 2014 as has the Lee Valley VeloPark at the opposite end of the park. The Olympic Stadium, now known as the London Stadium, is home to West Ham United Football Club and British Athletics, both making use of its multi-purpose arena.

During the construction of the Olympic Park, designers and landscapers were fully aware of the impact the project would have on the local area. In order for Londoners to benefit from the park, they chose to incorporate creative features so that the final outcome would not be completely sports oriented. In 2011, The Legacy List charity was set up to support the games but also to create connections with the general public by commissioning art installations and educational enterprises.

The art installations are still displayed in the park, reflecting on the landscape, history and local memories. Artists from far and wide were invited to participate, resulting in some unconventional outcomes. Some may not be much to look at whilst others may be easily overlooked, however, they all have interesting stories behind them.

Due to its 560 acres, it is not possible to see all the artworks in the park on one visit, but there are a few that are unmissable from the moment of entry. In fact, one can be seen from a distance and has attracted many visitors since its re-opening to the public in 2016. The ArcelorMittal Orbit stands at 114.5-metres and is the tallest sculpture in the United Kingdom. Originally commissioned by the Mayor of London in 2012. Sir Anish Kapoor and Cecil Balmond’s intricate continuous loop of recycled steel has been converted into a 178-metre tunnel slide that takes daring visitors spinning around the structure twelve times at the same speed it takes World Record Holder Wayde van Niekerk to run 400-metres.

The Mayor, Boris Johnson, originally commissioned the construction because he thought the park needed “something extra”. Designers were given the task of blueprinting ideas for an Olympic Tower from which Kapoor and Balmond’s concept was chosen as the winner. This brings about the question as to what the other designs looked like and why this contemporary eye-sore was selected above them all. At least the views from the top promise to be impressive.

The other fairly noticeable artistic feature in the park is Keith Wilson’s Steles. Thirty-five coloured poles ranging in height between 3 and 5-metres are found along the side of the Waterworks River which flows through the park before joining up with the River Lea. Although 8-kilometres of waterways flow through the park, Wilson’s Steles are only situated in a small section. Painted in the colours of the Olympic rings, these Steles look like giant crayons, however, are meant to resemble nautical waymarkers. These were the first art installation to be completed in the park and have a physical function as well as an aesthetic one. Due to their position in the water, they can easily be used as mooring posts for barges and small boats that float along the river. Alternatively, they make good roosting posts for the local black herons.

Other art installations are less noticeable until you stumble across them whilst exploring the park. Some may not even be noticed unless you are aware of them, to begin with. Hidden behind the Aquatics Centre is a utility building that has been used as a canvas by the artist DJ Simpson. Commissioned by the Olympic Delivering Authority, Simpson’s peculiar artwork, Open Folds, was installed in March 2012 to represent the contours of the neighbouring landscape. Constructed of dark anodised aluminium, Open Folds hugs the outside walls of the building. Simpson has punched out holes and formed patterned lines to emphasise the varying shape of the surrounding terrain.

In the main section of the park, another building has been used to display an installation of 2000 wooden cubes. One wall of the Podium Café is the location of Pixel Wall by the London-based design collective known as Tomato. The interactive wall allows visitors to turn the cubes, which have a mix of light and dark surfaces, in order to create different pixellated images or words. This is something that appeals to most visitors who cannot resist touching and playing with the cubes and discovering their creative potential. Despite clear instructions not to, vandals have unfortunately written on the cubes, ruining the overall aesthetic of the artwork.

The Fun Palace by Caroline Bird.

All forms of art were involved with the development of the Olympic Park and, although they all resulted in something tangible, they did not necessarily begin that way. As well as artists and designers, poets were invited to contribute their thoughts and words. On a wooden shed by the South Lawn is an engraved verse from a poem written by Caroline Bird.

Titled The Fun Palace, Bird’s poem narrates the life of Joan Littlewood (1914-2002), a theatre director who was heavily involved with the Theatre Royal in Stratford. During her career, she dreamt up the idea of a “Fun Palace” – an arts and education centre. She envisioned this building on the site of the park, however, her ambition never came to fruition. In honour of what would have been her 100th birthday in 2014, Caroline Bird penned this poem in celebration of everything she did for the artistic community in Stratford.

Other poets have also produced verses to be displayed around the park that reflect on the local area and its history. Lemn Sissay, a local author, was the first to be commissioned to write for the London Olympics. He provided three poems – Living Is In; Spark Catchers; and Spark – which are all exhibited in a similar manner to Bird’s poem. Carol Ann Duffy, who was appointed the Poet Laureate in 2009, also contributed with a poem about Eton Manor, a former leisure centre in the area.

John Burnside, a Scottish poet, was inspired by the suffragette, Sylvia Pankhurst, who was known to cycle around the area whilst campaigning for women’s equality. With this significant piece of history in mind, Burnside wrote Bicycling for Ladies, which has also been etched into wood, along with visual imagery.

I dreamed you came again

through the smog of time,

cycling from street to street

with The Women’s Dreadnought;

the houses lit for miles,

and a true friend

– Extract from Bicycling For Ladies

Made of glass and steel, and standing 9-metres high, Monica Bonvicini‘s artwork is hard to miss from the road passing the Copper Box Arena. Functioning as a mirror by day and sporting neon lights by night, the Italian artist’s contribution has an ambiguous meaning. Is it referring to the athletes at the Olympic Games, or is it instructing people to run for their lives?

Not all the artwork that has featured in the Olympic Park remains on public display. In 2012, Neville Gabie was appointed artist in residence for a period of 16 months. During this time, he created a series of work using film and photography. In one film, he recorded his attempt to sit on every seat in the stadium. His most imaginative outcome, however, is the recreation of George Seurat’s Bathers at Asnières (1884). By carefully placing people in high visibility jackets, Gabie reimagined the famous painting in the modern setting of the Olympic Park.

Although not commissioned as an art installation, there are two famous structures that attract many visitors and make great photograph opportunities. These are, of course, the Olympic Rings and the Paralympic Agitos. Located either side of the River Lea, these relics from the Games will remain as a reminder that the park was where the majority of the events took place. For whatever reason that you have gone to the Queen Elizabeth Olympic Park, seeing the Rings and the Agitos is a must. 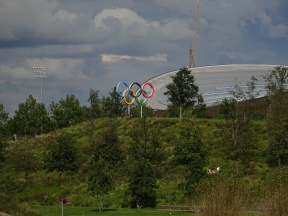 Despite being transformed into a recreational public parkland, it is impossible to erase the success London had in being the host city of the Olympic Games. Along with the Rings, Agitos, and arenas, facts and memories of the Games have been dotted around the park. The entrance near the Aquatics Centre has a series of facts spread over the pathway, reminding people what London and its athletes achieved, as well as informing the future generations. There is also an opportunity to try and beat Greg Rutherford’s long jump world record of 8.31-metres.

The park has been made child-friendly with the addition of playgrounds containing several different climbing frames, swings and slides to enjoy. These have been designed as abstractly as the buildings and structures surrounding them, in keeping with the contemporary appeal of the area. During the summer, Children can enjoy racing through the water fountains as they turn on and off at great speed.

The park, architecture, and artworks have not appealed to everyone, resulting in a lot of criticism, including in the national papers. The architecture critic for The Guardian expressed the opinion that “There is a frenzy of wacky light fittings, of playground installations, of seats, tree species, sculptural lumps of granite, kiosks, railings and coloured surfaces…It suffers from an Olympic syndrome, where everyone wants to be a Mo or a Jessica and make their mark … Great care was taken to make the Athletes’ Village aesthetically orderly, to the point where it began to resemble Ceausescu’s Bucharest: this eruption makes such efforts futile.”

It appears that the developers have tried too hard to make everything look modern and have ultimately created something that looks obscure and slightly alien. Unlike the natural parks around Britain, the Queen Elizabeth Olympic Park feels false and overcultivated. Attempts have been made to produce gardens of foreign plants, including those from Asia and the Southern Hemisphere, however, this increases the unnatural feel of the park. Granted, the park is clean, neat and well looked after, but it looks too perfect to be considered parklands. It does not help matters that between the arenas and different “green” sections is an abundance of concrete pathways. The roads crisscrossing the park are a nuisance too; it is impossible to forget you are in London.

The Queen Elizabeth Olympic Park is still being developed as new installations and areas are added to improve visitors’ experience. No doubt more artwork and perplexing architecture will be added to the area over the coming years. With different events happening throughout the year, there is always something new to attract tourists to the area, making the park a worthy project.

Whether or not contemporary art appeals, it is still worth taking a trip to the Olympic Park. We are fortunate to have free access to a place where British history was made and, hopefully, always be remembered.

The park is a short walk from both Stratford Station and Stratford International Station. There are also many buses in the area, making the park easily accessible. Facilities are available for children, adults and disabled to ensure that everybody gets the most out of their visits. Numerous cafés and restaurants are on site and there are plenty of staff to help if you need directions or would like a tour of the park.

Download the Art in the Park field guide for more information about the art installations and where to find them.