Amedeo Clemente Modigliani (1884-1920) was an Italian painter, sculptor and draughtsman who spent the majority of his working career in Paris. Almost a century after his death, the Tate Modern in London is holding the biggest display of Modigliani’s work in the UK to date, looking back at the artist’s productive, albeit brief, life. With over 100 artworks produced in Modigliani’s distinctive style, this exhibition contains some of the professed most memorable artworks of the 20th century.

“The life of Modigliani, wandering artist, so often resembles a legend, it is difficult to determine fact from fiction.” 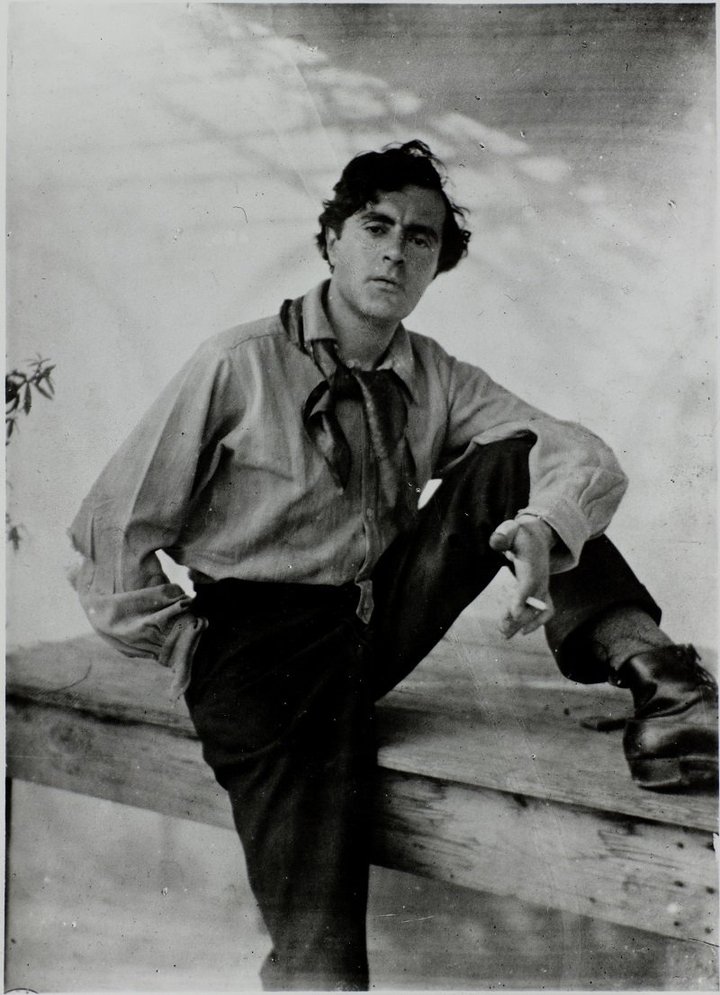 Modigliani died at the age of 35 after a fourteen-year career as an artist. Due to his early demise and his rumoured lifestyle, there has been a lot of incorrect speculation about his character. He was deemed as socially unconventional and earned a reputation as the archetypal romantic painter, starving in a cramped living space, whilst falling victim to alcohol and drugs. Within this exhibition, the Tate Modern attempts to biographically outline his life alongside his intense and controversial artwork.

Born into a Sephardic Jewish family in Livorno, Italy, Modigliani was a rather sickly child, suffering from a handful of illnesses, including Tuberculosis. His mother, at risk of spoiling her son, encouraged his passion for art, which led to him receiving a years education at Micheli’s Art School in 1898, run by the local artist Guglielmo Micheli (1866-1926). This was Modigliani’s first form of artistic instruction, which, naturally given the school’s location, focused on the study of techniques and themes of Italian Renaissance art. Although Modigliani would quickly develop his own style, evidence of his former training can be seen in his paintings, for example, the linear grace of his work resembles that of Botticelli (1445-1510), whereas, his focus on reclining nudes may have stemmed from Titian (1488-1576), who was one of the first artists to produce paintings of this nature.

Modigliani’s personal style began developing almost simultaneously with his move to Paris in 1906. Penniless, Modigliani settled in a commune in Montmartre, where he absorbed ideas from other artists in the area. He was particularly influenced by works he saw by the late Cézanne, adopting the simplicity of loose brushstrokes and method of colour handling. Modigliani is a significant example of the way exposure to new people and places affect artists.

Evidence of Modigliani’s impoverished lifestyle can be seen at the beginning of the exhibition. On more than one occasion, he used both sides of the canvas for different paintings, implying that he did not have enough money to afford new canvases. An example is The Cellist (1909), which contains Portrait of Constantin Brancusi (1909) on its reverse. In other works, ghostly faces can be seen through the bright paint as a result of Modigliani reusing old canvases.

Between 1911 and 1913, Modigliani put painting aside in favour of sculpture. At least two dozen were produced within this time period, several of  whichthe Tate Modern has on display. At this time in France, European artists were drawn to museums containing a wide range of historic art and antiquities, particularly from ancient civilisations in Africa. The Egyptian style was a particular favourite of Modigliani, which he replicated in his own carved heads by mimicking the clean lines and elongated facial features. 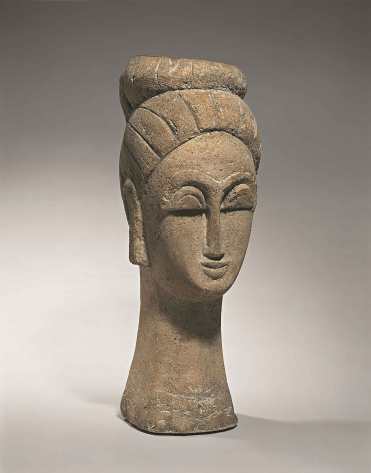 It is thought that Modigliani stole blocks of limestone from building sites to use for his sculptures. It was a far more expensive pursuit than painting, which may be one reason why he abandoned the project. Another reason may have been the outbreak of World War One, which would have restricted his access to materials, but, the most likely explanation for returning to painting was the effect the dust from the carved limestone was having on his weakened lungs. However, these few years spent sculpting brought a new dimension to his artwork.

The distinctive style of portraiture that Modigliani has become recognised for encompasses many of the elements that featured in his sculptures. Rather than painting the sitter as he saw him or her, Modigliani altered their appearances with swan-like necks and almond-shaped eyes. He often left the eyes blank with no discernible iris or pupil. Although not intentional, this makes the portraits look unnerving, like creatures out of a Doctor Who episode.

In 1916, Modigliani became friends with the art dealer Léopold Zborowski (1889-1932) and his wife Anna (1885-1978) – both of their portraits are part of this exhibition. Zborowski encouraged Modigliani to go down a new route: painting the female nude. Painting the naked body was nothing new in the art world, however, the way in which Modigliani approached it caused some controversy amongst art patrons.

The models who posed for these paintings dominated the canvas, often making direct eye-contact with the viewer. This indicates the changes occurring in the lives of women at the beginning of the 20th century. Women were more independent and had more say about their bodies. To further emphasise the point, Modigliani went against tradition and included pubic hair in his compositions, showing the true female form and not the idealised male preference. Unfortunately, these paintings were censored by a police commissioner on the grounds of indecency. Twelve of these nudes have been located and loaned to the Tate Modern.

As the exhibition nears its end, visitors see some of the works produced within Modigliani’s final years. As well as this, the exhibition narrative takes a more personal tone, revealing the more private life of the painter. Modigliani travelled to Nice in 1918 to avoid the end of the war and to alleviate his worsening health problems. With him came his pregnant partner, Jeanne Hébuterne (1898-1920) who bore him a daughter of the same name (1918-84). Jeanne became the principal subject of his artwork, however, whilst in the French Riviera, he painted local children and friends, opting for warm Mediterranean colours. Arguably, these are some of his strongest works.

The quality of Modigliani’s paintings, however, are a stark contrast to the direction his life was taking. He never made much money from painting, and anything he did earn fueled his growing addiction to drugs and alcohol. Although he continued to paint, his health was deteriorating rapidly and frequently suffered alcohol-induced blackouts. None of this is evident in Modigliani’s final self-portrait. Instead, he looks like a professional, confident painter, well-dressed with paint palette in hand. His dapper appearance initially made him seem reserved and asocial at the beginning of his career, however, his reputation changed rapidly, resulting in the rakish vagabond he ended his life as.

Destroyed by his own self-indulgence, Amedeo Modigliani died on 24th January 1920 in the Hôpital de la Charité where he spent his final days suffering from tubercular meningitis. His fiancee, who was expecting his second child, took her own life the day after his funeral, jumping out of a fifth-story window.

Art historians suggest that if Modigliani had not neglected his health, he could have lived to produce great masterpieces. Modigliani kept his illness secret claiming the symptoms were a result of his drunkenness. At that time in Paris, drunkards were tolerated but disease carriers were not. 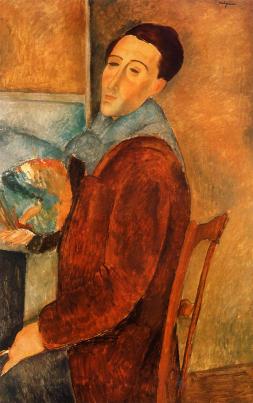 When Modigliani died, he was well-known amidst the artist communities of Montmartre and Montparnasse, however, he was still unheard of throughout the rest of the world. His posthumous fame began two years later after his work featured in an exhibition at the Galerie Bernheim-Jeune in Paris. This was shortly followed by the publication of a biography by André Salmon (1881-1969) titled Modigliani, sa vie et son œuvre, which introduced Modigliani to people further afield.

Modigliani has been labelled an original artist of his time who modernised figurative painting, however, it is difficult to say how good a painter he was. In comparison to the traditional form of painting, Modigliani’s work is rather poor. On the other hand, modern artists and critics were beginning to develop a taste for unconventional ideas.

Some may say Modigliani’s loose brush strokes are expressive, whereas other people may declare they look rushed. One of his sitters noted that “the portrait was finished after a few hours without him stopping for even a minute.” Others recall that he was always drawing, sometimes ten sketches in one evening. It was almost as if he was addicted to painting in the same way he was addicted to alcohol.

The Tate Modern removes the focus from each individual painting, preferring to reflect on the styles and techniques used during various periods of Modigliani’s life. Regardless of visitors’ artistic preferences, there is something interesting in learning about the artist, his influences, and what led him to paint in this manner.

To delve deeper into the artist’s past, the Tate Modern offers a virtual reality experience, for those willing to queue for half an hour, which takes individuals on a tour of Modigliani’s final studio in Paris. Another option is an audio guide which provides detailed information about specific artworks around the exhibition. The latter, however, is not included in the price of the entry fee.

At £17.70, the exhibition is rather pricey and therefore may not be worth visiting if Modigliani’s artwork is not a favourite style. For members, however, entry is free therefore nothing is lost by viewing the exhibition, and, who knows, it may be more interesting than expected. It is certainly intriguing to find out about an artist’s background, and Modigliani’s life is a heartbreaking story.

Modigliani will remain open until 2nd April 2018. Tickets can be purchased online or on arrival at the gallery. Under twelves go free with a paying adult.

One thought on “Modigliani”