After the success of Pink Floyd: Their Mortal Remains, the Victoria and Albert Museum has moved on to a completely different genre of music. Using the newly opened Sainsbury Gallery, the V&A are taking visitors on a journey through four centuries of European history, demonstrating the evolution of opera music and performances leading up to its contemporary interpretations of the 20th and 21st-centuries. Opera: Passion, Power and Politics focuses on seven particular premieres in seven different European cities whilst it not only celebrates the exceptional style of music but explores its effects on society, politics and the changes in the developing world.

In a darkened display room with dramatic lighting, the exhibition weaves through corridors of temporary walls decorated with relevant images, original artworks and a wealth of information. With striking typography, information is presented in an exciting manner, revealing the history of opera and the countries involved.

Opera first came on the scene in Italy during the 17th century, particularly in the cultural city of Venice. Unfortunately, as a result of a plague which killed off 30% of its population, Venice was struggling to maintain its maritime trade and political status. Despite this, it still remained a popular destination for tourists and pleasure seekers, also attracting artists and revolutionaries. Its international status brought a wealth of different cultures to the realm, offering entertainment such as carnivals and gambling.

Initially, opera was a production of spectacular costumes, dances and music, which were put on to impress visiting public figures and to show off the wealth of the theatre owners. The stories acted out were usually mythological retellings that contained parallels with the present day, thus placing current rulers in a positive light. However, in order to boost the Venetian population, opera was opened up to the public as a means of attracting more tourists and visitors.

The first public opera that was not restricted to courtly audiences was L’incoronazione di Poppea, with music composed by Claudio Monteverdi (1567-1643) and a libretto written by Giovanni Francesco Busenello (1598-1659). Premiering at the Teatro Santi Giovanni e Paolo in Venice in 1642, the opera describes the ambition of Poppaea, the mistress of Roman emperor Nero, to be crowned Empress. This was the first opera to recall a historical event rather than a fictionalised story and focused on morality and virtue. Full of problematic characters, it glorified lust and ambition. 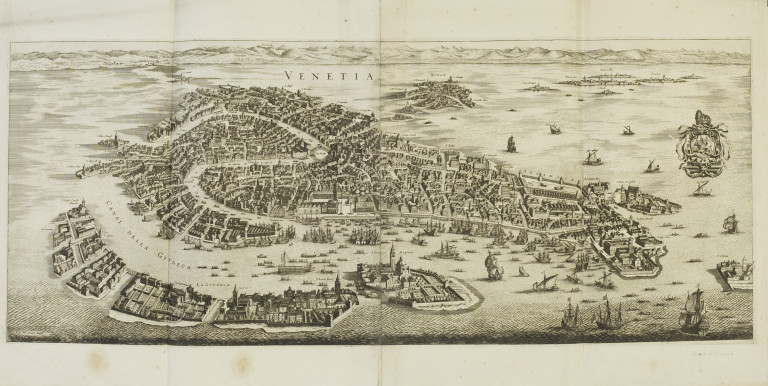 From Italy, opera quickly caught on in London due to its influx of foreign visitors. The Reformation during the reign of Henry VIII brought thousands of refugees to the city along with international influences. Covent Garden, in the west end of London, was an artistic community full of coffee houses where many would come to be entertained or partake in political debates. It was only natural for opera to find a home here amongst the existing artists and performers.

As indicated in large letters on the painted walls of the gallery, “G. F. Handel – young German composer takes city by storm”. At the young age of 26, George Frideric Handel (1685-1759) composed the music for the first Italian language opera written for the London stage. Translated from Aaron Hill’s (1685-1750) English version by Italian poet Giacomo Rossi, Rinaldo is a story about love, war and redemption set at the time of the First Crusades (1095-99) demonstrating the conflict between the Saracens and Christians. For the English audience, this would have felt familiar after the not so distant antagonism between Catholics and Protestants.

Impressively, Handel composed the music within a couple of weeks and Rinaldo was opened to the public on 24th February 1711 at the Queen’s Theatre in Haymarket. At this point in the exhibition, the V&A excels itself with a scenographic wooden installation representing part of the 18th-century theatre. A short puppet-like show performs intermittently whilst visitors listen to Il Vostro Maggio – an aria performed by mermaids during Act II of Rinaldo – on headsets provided by the museum. 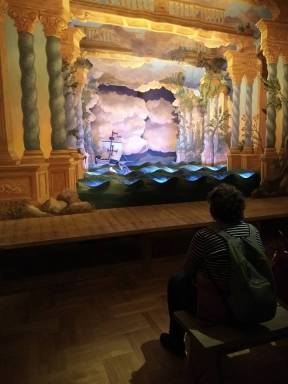 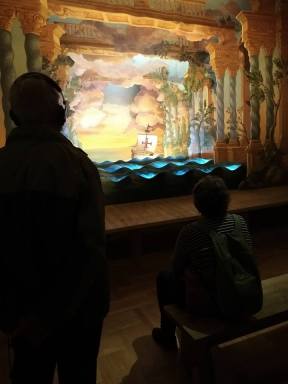 As with any innovation, opera received its fair share of criticism from the public and became a topic of debate in the neighbouring coffee houses. The artist William Hogarth (1697-1764) illustrated the fears many had about the foreign genre becoming a threat to traditional British Theatre, particularly Shakespeare. These etchings are displayed as part of the exhibition.

The V&A fast forwards seventy-five years to Vienna where another young musician is making his name known. This was, of course, Wolfgang Amadeus Mozart (1756-91). In the late 1700s, Vienna was the heart of European music and opera, which was encouraged by the “musical king” Emperor Joseph II of Habsburg (1749-90).

The philosophical movement, known as the Enlightenment (or the “Age of Reason”), was changing the way Europeans thought, particularly in regard to individual rights. This, along with the Vienesse love of music, made Vienna the perfect location to perform Mozart’s society-questioning opera Le Nozze di Figaro (The Marriage of Figaro).

Le Nozze di Figaro is a comic opera in four acts with an Italian libretto. It contains a range of characters from all classes of society and radically gives servants a central role. Previously, domestic workers were absurd figures to be laughed at, whereas this opera tells the story of Figaro and Susanna, two servants who succeed in getting married despite the corrupt efforts of their philandering employer.

“O, my homeland, so beautiful and lost! O memories, so dear and yet so deadly!”

The exhibition moves on to Milan, which in the 1840s was still under Austrian rule. Throughout the 19th century, the political and social movement Risorgimento or Italian Unification was gradually reunifying Italian states to consolidate the Kingdom of Italy. The famous opera house La Scala was often used as a venue for political discussion about independence and, therefore, was an ideal location for the first performance of Giuseppe Verdi’s (1813-1901) Nabucco.

Based on the biblical books of Jeremiah and Daniel, Nabucco follows the plight of the Jews facing abuse from the Babylonian King Nabucco (Nebuchadnezzar II). Despite the historical context, the audience would have been able to relate to the passion about national identity and fight for freedom, thus strengthening their own resolve.

With the rise of Nationalism affecting many European countries, new operatic styles began to develop. Two examples appeared in France in the mid-19th century, “Opéra Comique” and “Grand Opéra”. The former was an amalgamation of spoken word with sung arias and became popular with the public. The latter combined expressive scenery, singing and ballet. Richard Wagner’s (1813-83) Tannhäuser followed the form of Grand Opéra, however, he began to challenge tradition by blending orchestra and voice instead of having several different aria performances.

Tannhäuser und der Sängerkrieg auf Wartburg, to use its full title, was first performed at the Parisian Théâtre le Peletier on 13th March 1861 much to the delight of radical thinkers. It was not only Wagner’s Gesamtkunstwerk (all-embracing art form) that upset the traditional audience, it was the choice of themes. Sexuality, spirituality and personal struggle were concepts that disagreed with bourgeois tastes. Tannhäuser combines two legends and focuses on the struggle between sacred and sacrilegious love, naturally causing much discomfort amongst spectators. 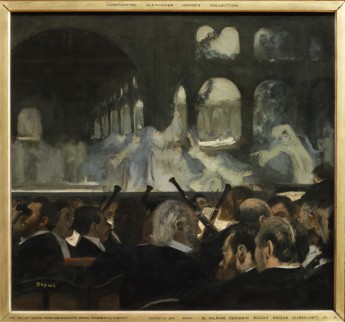 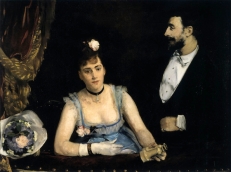 It is the 20th century that really radicalised the opera genre, as graphically demonstrated in this exhibition. New ideas in psychology and feminism brought new themes for composers to experiment with, much to the audience’s dismay. In Dresden, the Fin de siècle culture was changing the perceptions of women, an attribute that Richard Strauss (1864-1949) took hold of and ran with it his psycho-sexual opera, Salome. The Semperoper opened the revolutionary opera in 1905 with an orchestra of over one hundred instruments. Salome only lasts for one act, but the snippet the V&A shows on a digital screen suggests this is more than enough – particularly for those with a more sensitive stomach.

The final destination on the V&A’s opera tour is Leningrad at the commencement of Stalin’s dictatorship. With avant-garde experiments being all the rage, the young Dmitri Shostakovich (1906-75) composed his Lady Macbeth of the Mtsensk District sharing the writing of the libretto with Alexander Preys (1905-42). Based on a novella by Nikolai Leskov (1831-95), the opera covers themes of rural life, adultery and murder (obviously, since it is derived from the original Shakespearean character).

A common theme between the seven operas explored by the V&A is the discomfort and unrest they caused for some of the spectators. This was no different for Lady Macbeth, however, the person it upset the most was the infamous Stalin who only wanted Socialist Realism depicted in any art form. The heroine did not match Stalin’s ideal Soviet woman, therefore Shostakovich’s opera was condemned to political censorship. 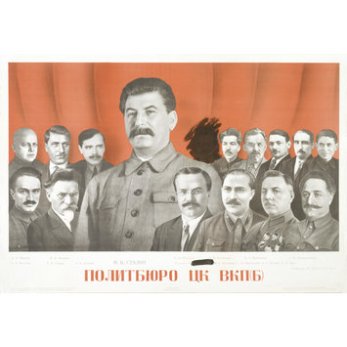 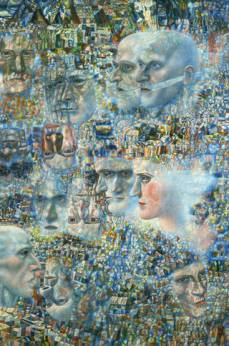 Comparing the first public opera, L’incoronazione di Poppea, with this 20th-century composition goes to show the major metamorphosis the genre has undergone in a period of 400 years. The V&A have presented this exhibition in an outstanding way, combining visual and audio to creates a seamless journey from 1642 to 1934.

Paintings from well-known artists provide glimpses into the way opera goers dressed and behaved in the past centuries, which gradually transform to photographic examples as the exhibition nears its end. Objects from original manuscripts and Mozart’s piano, to modern stage props, are located around the exhibition, adding to the historical aspect and providing more to look at than screens and walls.

Before the exit, although accessible from other areas of the gallery, is a large space full of enormous screens showing clips from a range of operas. With the audio headset, visitors can pick up the music and sit and listen to the various compositions. This video-audio experience uses a selection of 20th and 21st-century operas to quickly take viewers from its origins in Renaissance Europe to the global phenomenon it is today.

Opera: Passion, Power and Politics is an extraordinary feat on behalf of the V&A. The amount of time, effort and research that has gone into its construction is evident in the amazing outcome. Educational from both a historical and political perspective, this exhibition will excite opera fans and interest those that are new to the genre – although not suitable for younger visitors.

After attending this exhibition, opera will no longer merely be a form of entertainment. Who knew how political and socially challenging a seemingly harmless production could be? Opera: Passion, Power and Politics certainly challenges opinions and reveals that it is not only about music and singing. 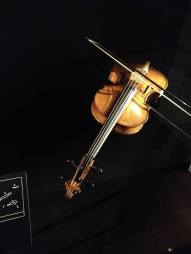 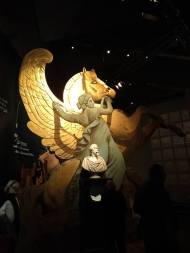 Opera: Passion, Power and Politics is on now until Sunday, 25 February 2018. Tickets are £19.00 and advance booking is recommended.