The Victoria and Albert Museum in South Kensington, London, is regarded as the finest museum of art and design in the world. With over 2.3 million objects from the past five millennia, the museum is constantly expanding. Housing hundreds of collections including post-classical sculpture, fine art, silver works, ceramics, furniture, musical instruments, oriental art, and the National Art Library, it is unsurprising that the content and building is forever increasing.

From its early beginnings in 1852, the museum has undergone numerous extensions, the very latest being completed this year. Exhibition Road, South Kensington, is home to several important locations, specifically the V&A’s neighbours: the Natural History Museum and the Science Museum. A new, user-friendly entrance has been designed and built, providing easy access from the road to the contemporary Sainsbury Gallery. This quarter of the museum will be home to temporary exhibitions.

Rather than having an entrance directly from the pavement, the Amanda Levete Architects have paved an ultra-modern courtyard, incorporating arches from the 19th-century building. This open-air area contains a glass-walled cafe to serve the anticipated 3.4 million visitors who use this new entrance each year.

Although people visit the V&A for its extensive collections, the building itself is a work of art. The original founders aimed to exhibit the best and most innovative design in the actual fabric of the building, as well as in its contents. The idea for the museum was introduced by Prince Albert (1819-61) the Prince Consort to Queen Victoria (1819-1901). After the very successful Great Exhibition of 1851 in Hyde Park – the first World’s fair – Prince Albert urged for the £186,000 to be spent on developing a cultural district in South Kensington; “Albertopolis”.

Prince Albert’s ambition was to “increase the means of industrial education and extend the influence of science and art upon productive industry.”

In 1857, construction began on the building that would become the South Kensington Museum (now the V&A). It was not to only contain galleries but be the residence of government departments and colleges, including the Central School of Practice Art (Royal College of Art). The original building was a temporary iron structure that stuck out like a sore thumb. It was also quickly evident that it would not be large enough to accommodate the sheer number of exhibits. Thus, a new elaborate plan was drawn out and construction began on a permanent structure.

Throughout the 1860s and 70s, the museum expanded with new rooms being constantly added to the structure. Henry Cole (1808-82), the first director of the museum, had very ambitious decorative schemes and wanted the building to represent the best of British design. With a distrust for foreign builders, Cole employed leading English artists and designers of his own choosing to work on the building.

Amongst the many workers were two painters and sculptors: George Frederic Watts (1817-1904) and Frederic Leighton (1830-96), dominant figures in late Victorian art. They were commissioned to produce canvases to display inside the gallery as well as design intricate mosaics. These mosaics made up the thirty-five portraits of significant European artists that adorned the South Court. This was later affectionately named the Kensington Valhalla after the Norse mythological term for the resting place of heroes.

Donatello: design for a mosaic in the Museum 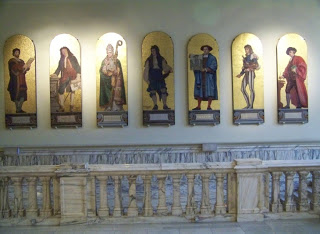 Specific rooms within the museum were assigned to various artists to decorate. One interior designer of particular note was William Morris (1834-96) who was known for his distinctive designs, craftsmanship, and paintings, amongst many other things. Another name worth knowing is Owen Jones (1809-74), who was commissioned to produce decorations for the Oriental Courts. He wanted his designs to complement the objects on show, therefore took great care to depict Persian, Indian, Chinese and Japanese art styles.

Designs for the decoration of the Oriental Courts (detail), Owen Jones, 1863 – 64

Godfrey Sykes (1824-66), a Yorkshire-born designer, was very active in the development of the South Kensington Museum. He was the head of the decorative design team responsible for the majority of the museum’s ornamentations and ornate trimmings. The museum was the last building he worked on before his early death at the age of 42. Some of his best work includes terracotta columns in the Lecture Theatre and a tiled frieze in the Centre Refreshment Room. These, however, were not necessarily created by Sykes himself. Although he produced the designs, others would have been responsible for the modelling, including a man named John Lockwood Kipling (1837-1911), the father of the world-known writer, Rudyard Kipling.

Sykes was known for his sense of humour, which he used to great effect in his “inhabited” alphabet with witty touches. Each letter contained an illustration of a person or persons interacting with the letter. These are located throughout the museum and are often used in relevant books published by the Science and Art Department.

The director, Henry Cole, and evidently the brains of the construction, retired in 1873. Although building works continued for another decade, work eventually stopped, leaving the museum in a chaotic, unfinished mess. Although able to function as an institution for the great collection of objects, the public was unhappy with the sorry looking appearance of what had promised to be a grand building. After much campaigning, an architectural competition was announced in 1891 to find a final design for the museum.

The winner of the competition was the young Aston Webb (1849-1930), an English architect who would later go on to design the facade of Buckingham Palace. Although some critics preferred the design submitted by the runner up, John Belcher (1841-1913), Webb’s proposal was far more practical. 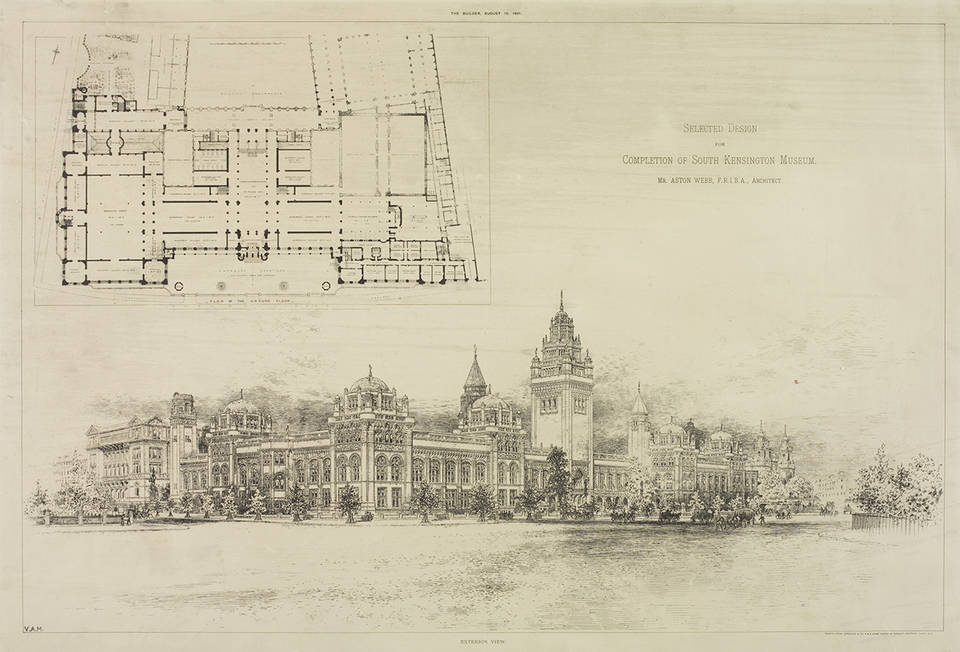 Design for the completion of the South Kensington Museum, Aston Webb, 1891

It was an additional eight years between the competition and the beginning of construction. Aston Webb finalised his design proposal thinking carefully about the general floor plan as well as the appearance of the exterior. Similarly to the original designers, Webb wanted to show off the splendour of British art and emphasise the importance of the museum. The facade of the building includes statues of significant people involved with the museum.

… a statue of Queen Victoria supported by St George and St Michael over the great arch and the Prince Consort below, as the Founders of the Museum; on either side in niches the present King and Queen. The great archway itself would be enriched with symbolic sculpture. The large bosses in the archivolt would represent various crafts; the large spandrils would have figures representing Truth and Beauty; while the two smaller niches on either side would have statues representing Imagination and Knowledge. …The whole edifice I suggest to be crowned by a gilt bronze winged figure of Fame.

Unfortunately, Queen Victoria had died before the completion of the museum and never got to see herself immortalised in stone above the Grand Entrance. She did, however, take the opportunity to lay the foundation stone for the new structure, and thus renamed the South Kensington Museum the Victoria and Albert Museum. King Edward VII, who came to the throne in 1901, officially opened the V&A on 26th June 1909.

Official programme for the laying of the foundation stone of the Victoria and Albert Museum, 1899 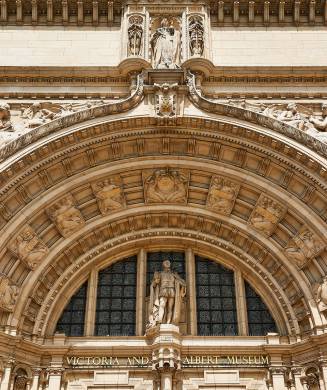 Aston Webb’s design was the last major construction the museum undertook – the new Sainsbury Gallery being rather minor in comparison. Yet, plenty of change has occurred over the past century.  Between 1910 and 1914, the then director, Sir Cecil Harcourt Smith (1859-1944) objected to the ostentatious design on the museum. He believed that the focus should be on the items in the collection and that visitors did not want to be distracted by the surrounding architecture. The way forward, in his eyes, was to create modest and neutrally decorated display spaces.

Harcourt Smith ordered the destruction or covering up of the supposedly inappropriate decor. Fortunately, the First World War halted the procedure, thus saving many of the original features. It was not until 1973 with the appointment of Sir Roy Strong (b.1935) as the director that the work conducted pre-war was reversed. Strong managed to restore some of the original interiors and reinstate the 19th-century collections. Unfortunately, some of the initial features are lost forever.

Beginning as a dream of Prince Albert’s, and quickly becoming a reality, the Victoria and Albert museum is continually becoming more diverse as knowledge is widened about past works of art and cultural representation. The V&A is not meant to be a historical museum, therefore it also keeps up with the times, displaying modern and contemporary exhibitions amongst the ancient. A recent exhibition illustrates how variegated the V&A’s collection can be. Pink Floyd: Their Mortal Remains (closing on 1st October 2017) is the first audio-visual display put on by the museum, showing the beginnings, middle and end of the iconic British band.

Despite the various extensions over the years, the Victoria and Albert Museum remains one of the most difficult buildings to understand and navigate. However, this is one of the great appeals of the museum. It is a unique building with an unequalled collection. It is possible to visit the museum several times and see something different on each trip. As the collection continues to grow, the V&A will never lose its appeal; there is something there for everyone.

Any visitor to the Victoria and Albert Museum is likely to be bemused as to what exactly the central thread that animates these discrepant if marvellous collections. The answer is that there is none. For over a century the museum has proved an extrememly capacious handbag.