… that famous Ceiling in the great Hall at Greenwich Hospital, painted by our Ingenious Countryman Mr. Thornhill, who has executed a great and noble Design with a Masterly Hand, and uncommon Genius. [sic]
-Richard Steele, The Lover (1714)

How often do you get the opportunity to view a painted ceiling up close? Very rarely. For a limited time only, a once in a lifetime opportunity is being offered by the Old Royal Naval College to stand directly under the phenomenal painting in the Painted Hall, Greenwich. For £10, visitors can ascend 60 feet and follow an hour-long tour, learning the secrets of the little-known artwork from a position no one will ever be in again.

Nicknamed “the Sistine Chapel of the UK”, the 300-year-old painted ceiling rivals the famous Michelangelo in its beauty, however, has sadly been deteriorating after years of being subjected to smoke, dust, heat and humidity. The recent use of the Hall from 1937 to 1997 by the Royal Navy as a dining space has greatly impacted on the state of the paintings. It has also been subjected to film crews intent on creating the perfect scene for their blockbuster hits. These include Indiscreet (1958), Octopussy (1983), Doctor Who (1993), Four Weddings and a Funeral (1994), Sense and Sensibility (1995), Dorian Gray (2009), Pirates of the Caribbean (2011), and Les Misérables (2012).

This year, an ambitious conservation project has begun in the Painted Hall with the intention that by 2019 the 40,000 square foot of painted surface will be restored to its original vibrancy and splendour. Volunteers are hard at work cleaning and touching up the precious artwork.

The Hall, now fitted with metal scaffolding, is taking advantage of the formidable task to give the public the opportunity to appreciate the skill and workmanship of Sir James Thornhill (1675/6-1734), and English decorative painter and serjeant-painter to George I.

Before his appointment to serjeant-painter (1720), Thornhill was George I’s History painter and was commissioned with the mammoth task of painting the ceiling of the Hall, which had been established for use as a hospital for injured seamen. Thornhill began the task in 1707 and, with help from other painters, completed it in 1726.

Despite being responsible for the design of the artwork in the Painted Hall and being the first English-born painter to be knighted, Thornhill is almost unknown to today’s public. If he is known at all, it is usually through his connection to the celebrated British painter, William Hogarth (1697-1764), to whom he was both teacher and father-in-law.

James Thornhill was born in Dorset where, had it not been for a generous great-uncle, he would never have raised the funds to develop his artistic career. With the financial help, Thornhill was able to become apprenticed to the painter Thomas Highmore (d.1719/20) and eventually became known amongst the Painter-Stainers’ Company in London, of which he became the Master of in 1720.

Inspired by the Baroque paintings he had seen on his European travels, Thornhill became popular for the decorations of interior public and private buildings. He was able to provide a Britishness to the designs that foreigners in the trade would not have been able to produce.

The Painted Hall commission is arguably Thornhill’s greatest work, however, the demand for painted ceilings decreased rapidly afterwards, leaving Thornhill without well-paid jobs to work on. As a result, Thornhill quickly became unknown in comparison to the artists who preferred to work on canvas, particularly Hogarth whose renown greatly overshadowed his father-in-law’s.

After donning hard hats and protective vests, the tour of the Painted Hall begins with a talk about the painting covering the entirety of the west wall. Whilst seated in front of the formidable artwork, it is possible to study and identify the depicted characters in the busy scene. In the centre, surrounded by family, sits George I, the first king of the Hanoverian line. They are framed by Corinthian columns, giving the entire composition a 3D result, which is further enhanced by the dome of St Paul’s Cathedral situated in the background.

As can clearly be seen in the above photographs, there are more figures in place to the sides and back of the royal family. These are allegorical figures, including Justice and Peace, which were included to hint at the stability of the Hanoverian dynasty. The artist has taken liberties to suggest that the German-speaking King will cause a positive development to the recently established United Kingdom. To emphasise this further, Thornhill chose to include an inscription extracted from Virgil’s Eclogues, “Iam Nova Progenies Coelo,” which when translated means “a new generation has descended from the heavens.”

The most interesting character, and perhaps most amusing, featured on the west wall is Thornhill himself. Standing to the left side of the king, Thornhill is gesturing with one hand towards George I whilst looking over his shoulder at the viewers of the painting. Some believe his intention was to draw attention to the most important figure in the composition – the king – by motioning towards the centre. On the other hand, others suggest that Thornhill may have been taking pride in his work and showing off his accomplishment, or, as one guide joked, he may be asking George I for his payment. 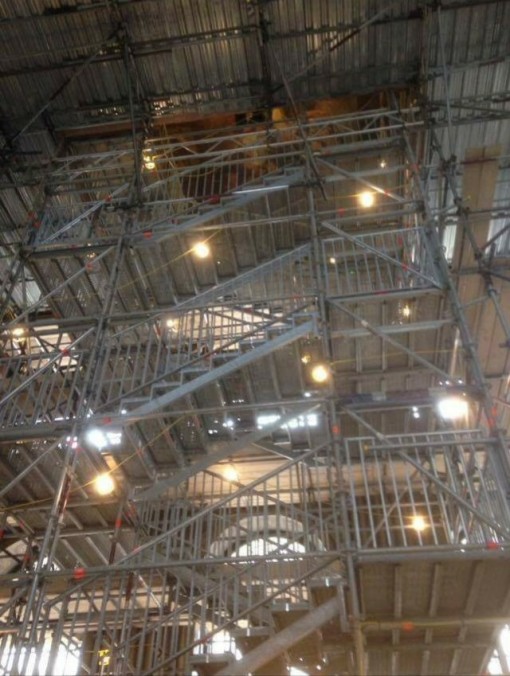 The main part of the Painted Hall tour takes place at the top of the temporary scaffolding. From the ground, it is not possible to see the ceiling due to the iron sheeting being used as a makeshift floor for visitors and workers. When standing on this platform, it is almost possible to touch the artwork, making it the closest people have ever been to the painting for over half a century.

The ceiling features a different King and Queen to the west wall below, honouring the couple responsible for founding the original hospital for which the building was used. William III and Mary II sit dead centre of a decorative oval, which is busy with a myriad of figures. Similarly to the depiction of George I, allegorical figures can be noticed within the energetic painting, however, there are far more than shown on the wall. As well as figures representing Justice, Peace, Liberty and so forth, are the four cardinal virtues pictured physically conquering vices such as Calumny and Envy.

In sequential order around the oval, the twelves signs of the Zodiac are depicted as humans wearing or holding relevant articles that relate to the mythical representation of each sign. Divided into four groups of three, figures to represent the seasons hover over the appropriate signs. 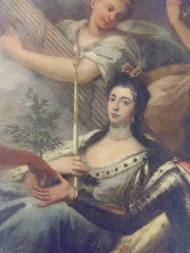 The tour leader explains the presence of each character in detail, drawing attention to the sections deemed most important. It is awe-inspiring to see for yourself the sheer size and individual features of the ceiling painting. Being up so close allows you to appreciate the painstakingly hard work Thornhill and his assistants undertook to create such a perfect painting. There is no way that looking at the ceiling from the floor (once the scaffolding has been removed) can produce the same sense of wonder. 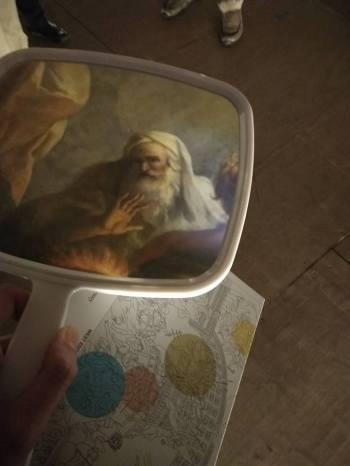 All of the paintings in the Hall, regardless of the hand that produced them, were based on detailed sketches provided by Thornhill. The artist would have known what the King and Queen had looked like, having lived during part of their reign, however, the other characters were likely based on models either employed by or already known to him.

Although this is speculation, there is some evidence to suggest that Thornhill based his figures on real people. The figure of Hiems (the Latin name for Winter) was clearly a portrait of John Worley (1624-1721), the first pensioner to enter Greenwich hospital in 1705. The proof of this can be seen in Thornhill’s original sketches now owned by the National Maritime Museum. Thornhill annotated his designs in order to make it clear who was who and what was going on in the scene. On a study of an elderly man, Thornhill has written “John Warley aet: 90 born at Harford West … at Greenwich he is Hyems.”

Described as “one of the greatest baroque ceilings in Britain” by Sky News, the Painted Hall Ceiling is a tour worth taking. Once the conservation project has been completed, the artwork will only be viewable from ground level, so take this once-in-a-lifetime opportunity whilst you can. Whether or not you are a lover of art, the experience is worth the £10 fee and will impress everyone you talk to afterwards.

It is recommended that you book in advance, especially in the instances of large parties. Nevertheless, it is also possible to purchase your ticket on arrival at the venue. Taking photographs is encouraged and the tour leaders are very knowledgeable, thus making your visit a memorable experience. Enjoy studying the masterpiece and discovering the painting’s mysteries and secrets.

5 thoughts on ““A Great and Noble Design””