The Royal Collection at the Queen’s Gallery, Buckingham Palace, currently contains a large number of the paintings and drawings of Canaletto, one of the most famous Venetian painters. These works were brought to Britain by an art dealer, Joseph Smith, who was incidentally the British Consul in Venice. The paintings entered the hands of the Royals in 1762 when King George III bought Smith’s entire collection.

Amongst the collection displayed in the exhibition Canaletto & the Art of Venice are some of the most recognisable of Canaletto’s works. Focusing on the views in Venice, Canaletto painted from various locations, producing a series that shows a journey along the Grand Canal.

It is claimed that Canaletto is the most famous Venetian view-painter, etcher and draughtsman of the 18th century. He was born into the art world on 28th October 1697 to the theatrical scene painter, Bernardo Canal (1674-1744). It is thought that this is how Canaletto got his nickname, for, in order to distinguish himself from his father, Giovanni Antonio Canal was most likely referred to as ‘Little Canal’ or, as it is in Italian, ‘Canaletto’.

Canaletto began his career assisting his father with the sets for Vivaldi’s operas in Venice, and later, Alessandro Scarlatti’s operas in Rome. It was whilst he was in Rome that Canaletto began sketching famous buildings and ancient monuments, causing him to abandon the theatrical work on his return to Venice. Thus began his topographical painting career.

Specialising in grand views showing the public face of the city of Venice, Canaletto’s paintings are full of strong, bright colours and his handling of the brush is extremely smooth and precise. Canaletto would create a sketch on the spot from which to paint from, producing what looked like an accurate record of the landscape. However, this was often far from the case. In order to create a better composition, Canaletto would alter the proportions of buildings or shift their positions. In some instances, the view is entirely imaginary. The term for these paintings is Capriccio – Caprice in English – which refers to the combination of architectural accuracy (recognisable building etc) with elements of fantasy.

The 18th century saw an influx of wealthy visitors to cities such as Venice, particularly British aristocrats. With the assistance of the aforementioned Joseph Smith, Canaletto made these people his best customers, producing views of the canals for them to take home as mementoes (a precursor to postcards).

Unfortunately, Canaletto lost the majority of his clients as a result of the War of the Austrian Succession (1740-8), which put a temporary end to Continental travel. In an attempt to win back customers, Canaletto moved to London in 1746 where he resided for a decade, painting views of London and the countryside. However, rumours were spread that Canaletto was an imposter and not the famous Venetian painter he claimed to be. Therefore, in 1756 he returned to Venice and, although never recovering his popularity, continued to paint for the rest of his life.

Both during and after his life, Canaletto’s style of painting was highly influential in Italy and eventually the rest of central Europe. Many of his works were copied by his followers, causing his style to live on long after his death. His nephew, Bernardo Bellotto, was one of the artists who helped to spread his uncle’s renown and technique.

On display in the Queen’s Gallery are some of Canaletto’s brief sketches, which he made on the spot in preparation for the final painting. With a precise hand and a few sketchy lines, Canaletto was able to capture the scene in front of him. These, despite their quickness, were highly recognisable representations, and many, in fact, are finished drawings, rather than merely a starting point.

It is interesting to be able to view Canaletto’s preliminary sketches as well as the final paintings because it gives an insight into the way the famous artist worked. Paintings can be taken for granted when only seen in their final frames. The hard work and time taken are often forgotten, but logic indicates that these paintings did not just appear out of nowhere.

As the exhibition reveals, Canaletto carried a sketchbook with him around the city, drawing and making notes to refer back to. Letters labelled areas of the page to indicate how that section should be painted, e.g. “B” for bianco (white) and “R” for rosso (red).

Hung in a strategic order, Canaletto’s paintings, and those of his contemporaries, are set off by the royal blues, greens and reds of walls. The exhibition takes visitors on a journey through various stages of Canaletto’s life, keeping his Venetian landscapes separate from other artistic ventures.

Interestingly, Canaletto did not only produce paintings of Venetian buildings but experimented with more spartan landscapes. With no structure to portray, these paintings are far less detailed and take on the aura of the religious and mythical artworks of other artists in Italy at the time. These are situated in the centre of the exhibition where the height of the ceiling allows the large canvases to be appreciated fully.

Without a doubt, Canaletto’s paintings of the Grand Canal are some of his finest works. The buildings are so precise, they are comparable with architectural blueprints. On close inspection, these lines may feel too perfect and unnatural, but when viewed on a grand scale, they help to produce an almost photorealistic snapshot of 18th century Venice. What his most significant achievement is, however, the quality of the painting of the canal itself. Whether the waters were as peaceful as depicted will remain forever unknown – Canaletto may have been making use of Capriccio – but his version looks impossible to have been produced by paint alone. Evidence of a paintbrush can be seen in the suggestion of water ripples that have been painstakingly added to the smooth underlayer. On the other hand, the accurate reflection and glass-like quality of the liquid are beyond the realms of comprehension. The eyes know what they are seeing, but the brain cannot believe it to be possible.

Canaletto also used his fantastic skill at architectural drawing to create a series of paintings of the ancient ruins in Rome. These, too, are phenomenally impressive, it feels like it should be possible to reach out and feel the texture of the stone and experience the dusty streets. Alas, the lack of canals in Rome prevents Canaletto from revealing his full range of skill. It is most certainly the combination of buildings and water that stand out the most and wins Canaletto the title of the best Venetian painter of the 1700s.

Canaletto & the Art of Venice will remain available to the public until Sunday 12th November 2017, when it will be dismantled to make way for a new exhibition: Charles II: Art & Power. Tickets are £11 for adults and £5.50 for children over five and are available to purchase on arrival to the Queen’s Gallery. However, during the school holidays, it may be advisable to purchase tickets online in advance. 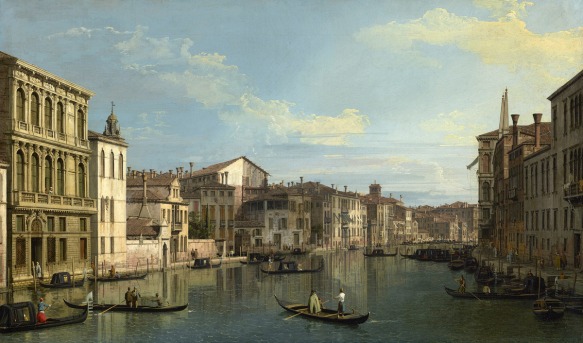 4 thoughts on “Canaletto & the Art of Venice”