Due to going on holiday, I have only attended two art sessions this month (I am aware there is one more to go), so naturally I have less artwork to show. I managed to complete two drawings per week – one colour and one black and white – and experiment with different styles.

Week One: Many people were impressed with my drawing of Disney’s Pluto; although I was not impressed with their lack of Disney knowledge – they thought it was Goofy! One lady quizzed me on the type of pencils I was using: “Are they different from normal pencils?” Apparently my ability to blend colours together is rare.

I also used art group as an opportunity to continue to draw places I saw in Austria. I happened to have a photograph on my mobile phone of the church in Igls, so based my sketch upon this.

Week Two: Again I impressed people with my colouring skills as I drew a dragonfly. I was inspired by an image on Pinterest where the artist had used splashes of paint to produce a multicoloured finish. Lacking the right materials, I had to make do with pencils. As I had a lot of time left before the end of the session, I found a photo of part of a violin and attempted to draw it. I used a range of sketching pencils to try and get the shading correct, however I think my perspective was off.

In other news, I have been personally asked to submit artwork to be displayed on 5th July at the Richmond Fellowship centre (the location of the art group). I have sent in a copy of the dragonfly above, and a scan of my drawing of Donald Duck. If I have some spare time I may produce more work specifically for this event.

I recently went abroad and wanted some colouring pencils that were easy to pack in my hand luggage. I found these half-length pencils in a local store that sells pretty much anything. They had been supplied to the shop by Tiger Stationery, which I had never heard of before, but I thought I would give them a go.

The cardboard packaging claims that the pencils are high quality with strong, break resistant leads, making them easier to sharpen.The pencils themselves are approximately 9cm tall and have smooth round edges, so no horrible dents in fingers from gripping them too hard!

For such a small pack of pencils there is a good range of colours. There are two shades of blue and green – light and dark – as well as all the other colours of the rainbow. There is also a black, brown, pink and maroon – the latter being a colour that is not usually in a typical 12 colour selection.

To begin with these pencils were great. They were easy to pack in my bag, did not take up too much room, and the colours came out fairly well in my colouring book. I did find that I needed to press fairly hard to get a strong, bright shade, which in small areas was not an issue. The problem arose when colouring in larger areas. The leads did not cooperate with my attempts to smoothly cover the white space, resulting in an uneven, scribble-like finish. (see second photo above)

So far these pencils were fairly successful for my purpose, although I quickly decided I would not use them for “proper” art work. But then I needed to sharpen them, and it all went horribly wrong. It seems that “strong break resistant leads” is false advertising on behalf of Tiger Stationery. The dark blue pencil was about 4cm high by the time I managed to sharpen it without the lead breaking. I could barely hold the pencil, and when I began to use it again, it broke immediately! The same thing happened with two thirds of the pack. Perhaps the pack had been dropped on the floor at some point, and was not a result of poor manufacturing, yet whatever the cause of these fragile pencils, they are definitely not strong or break resistant.

I am thoroughly disappointed with Tiger Stationery colouring pencils. After two pages the dark blue needs to be chucked away as it is no longer usable, and all but two of the others currently have broken leads. After a grand total of four colouring pages, these pencils are not going to be used again. TIGER Stationery? More like OAP pussy cat. I do not recommend. 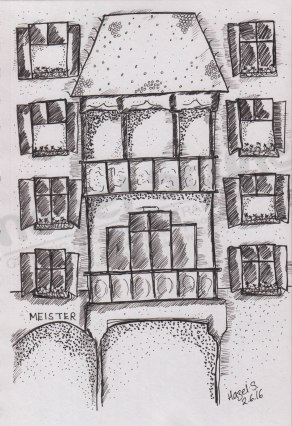 It was my aim to complete several drawings of Austrian buildings and scenery whilst on holiday in Innsbruck, however there were so many things to do that I barely got the chance! I only managed to sit down and draw twice. The first sketch is of Goldenes Dachl – or the Golden Roof – which I am very pleased with. The second drawing – Stift Wilten – did not go as well as I hoped. I struggled with the perspective and rushed the shading. I am disappointed that I did not get the opportunity to improve on this, but since I have not drawn buildings in this way for several years, I think I did better than I initially expected.

Despite my lack of artwork, I managed to take hundreds of photographs around Innsbruck. Austria in general is a very scenic country. The mountains make you feel like you are in the countryside even if you are walking through a city. One thing that makes Austria different from countries such as England is the architecture. Many of the buildings I saw around Innsbruck and the nearby village of Igls were absolutely beautiful. In the mountains it is common for the houses to contain wooden features. Sometimes these are converted barns but mostly this is the traditional style that has been maintained throughout the years. Many of these houses have several balconies that are great places to sit regardless of the weather, as the roof usually overhangs, creating a shelter from rain, sun and snow.

In the city of Innsbruck, despite the contemporary shops and companies, the buildings have not changed much over the past couple of centuries. Instead of knocking down old buildings and erecting concrete or glass monstrosities such as the ones in London, the original structures are used to house modern businesses. This makes walking through the streets a pleasant experience, and can almost convince you that you have travelled back in time – although their tram system has definitely been brought up to date. Many buildings have paintings on them of either Austrian or religious scenes. Some of these are centuries old, whereas others have been painted more recently, but in the old style. Tradition is a very important aspect of Austrian lifestyle.

Innsbruck is definitely a cleaner, more attractive and quieter city than the gray city of London. Granted it is so much smaller, but there is no one rushing around, no obscenely long queues, and the public transport actually sticks to the timetables! See TFL, it CAN be done!!

Of course, as with all countries, Austria does move with the times. Their shops sell the latest fashions and gadgets as any other western country would do. But unlike England, they still celebrate their heritage by dressing up in traditional clothing, and not only for fancy dress parties. Many restaurants require staff to wear a Dirndl or Lederhosen, and you can buy teddy bears dressed up like this in every souvenir shop. 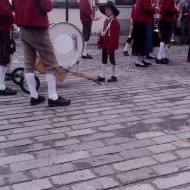 Whilst I was in Austria I got to experience the Festival of the Sacred Heart of Jesus – Herz Jesu Tag. The Austrians dressed up in their traditional clothes, went to church then paraded through the village with an orchestra playing Austrian music. They take their festivals very seriously and it is wonderful to watch even if you are not participating.

To sum up, Austria is a beautiful country from all angles. Yet the thing that attracts tourists the most is definitely the mountains. I hope these photographs inspire you to holiday in the Alps!